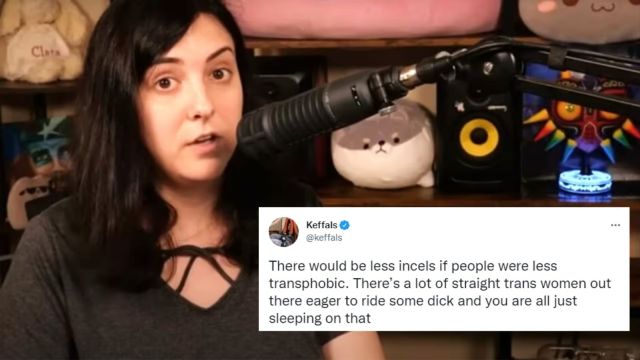 Incels are one of society’s many big problems that just refuse to disappear. These people are so hung up against women that they spit out misogynistic takes and claim they’re entitled to sex incessantly. But, as society struggles to deal with this modern social epidemic, one Twitch streamer named Clara Sorrenti, also known as Keffals, shared a suggestion that caught the internet in a stir.

Keffals, who is trans, suggested on Twitter that the world would be filled with fewer incels if “they were less transphobic.” The post implied that these people should consider having sex with trans people because there are “trans women out there eager to ride some dick.”

Some have argued that incels “are not gay” and that’s why they don’t want to sleep with transgender women. However, Keffals rebutted that argument by saying “not having sex with women is gay.” Hard to argue with that one.

Despite the post trying to compliment trans women, people assumed Keffals was suggesting that trans people should be sexualized and objectified, rather than seen as human beings. To add more salt to the wound, the post implied that trans women should sleep with people known for being violent and misogynistic.

This is obviously not great rhetoric considering trans women are also vulnerable to violent attacks by transphobes, and in some cases, the government.

Overall, whether it’s a joke or a serious take on a social issue, people aren’t happy. Not because they’re transphobic, but because of the idea that trans people, especially trans women, should sleep with “dangerous” men. Not a good look, especially if you’re trying to advocate for trans rights.