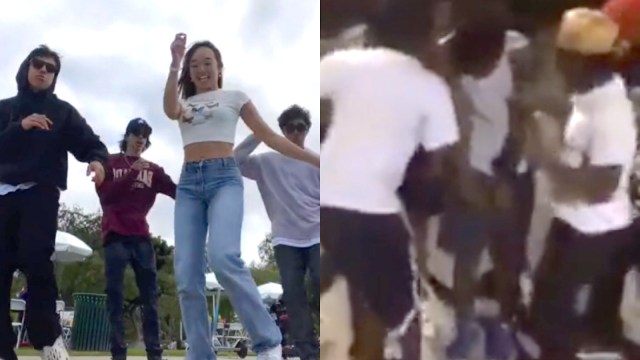 A seven second viral TikTok sound is making a comeback online after the internet discoveres the full-length original audio.

The “slide in ‘n slide out” trend is one of the more wholesome trends to emerge on the platform in the last several months, spawning laughs and smiles instead of controversy and legal repercussions. This of course barring the not-so-wholesome lyric from the catchy tune, “kill that h**.”

The audio itself comes courtesy of an accompanying video in which a group of men, likely friends, gather in a circle while freestyling and dancing. The original seven second clip showed only one of the friends taking his turn to step into the circle and share his freestyle, but that was all TikTok users needed to make the catchy tune into a viral craze.

Choreographed dance moves weren’t the only way to tackle this trend. Many TikTokers used the audio to make light of an ordinarily negative situation, such as coming home from school in a good mood only to have your parents dampen your spirits. The good mood in this scenario is the “h**” and the parents are the ones who “killed it.”

Parents and pets were among the running theme with this trend, from ruining good moods to chewing up phone chargers.

Now that the full length version of the viral sound has been unearthed, those familiar with it are absolutely loving it.

As you can see, there’s much more going on here than just assassinating harlots. The group of friends each take their turn stepping into the circle and the result is just as serotonin boosting as the first one. Try to watch the whole thing without smiling, we dare you.

Twitter users were quick to comment on just how much fun these group of guys are having, with one in particular expressing a casual amount of jealousy.

Since being unearthed, all those who loved the catchy tune the first time are finding it all but impossible to not love this original ten times more.

Perhaps the best part of all was finally discovering the correct lyric to what many misheard the first time. In case you were wondering it is “slide in ‘n slide out” not “sari na sara.”

Given the catchy quality to the audio, which practically lends to virality, it’s very likely that any part of the newly-unearthed video could become the next viral TikTok trend. Let’s just hope this time everyone gets the lyrics right.