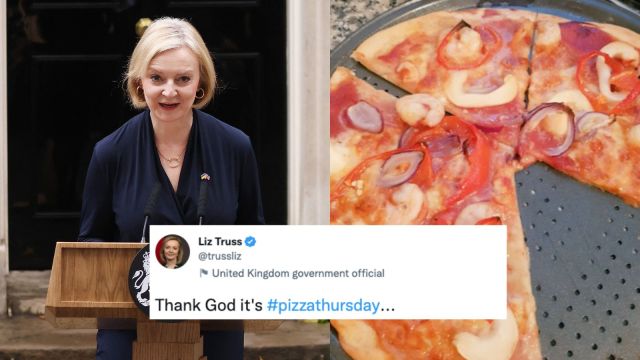 It was clear that not everyone in the U.K. liked conservative Prime Minister Liz Truss. Since her resignation on Thursday, more information has come to light thanks to some super sleuths online. Apparently, there was a sign that already existed that proved that she was never meant to run the country. Sadly, nobody noticed it until it was too late.

A 2018 post made by the now-former Prime Minister has resurfaced on Twitter. In it, Truss shares a photo of a pizza she is eating. If you think pineapple on pizza is bad, then feast your eyes on this monstrosity that appears to be pizza with seafood toppings on it.

Since the post met the light of day once again, people online have been expressing disgust at what they saw on screen. Some saw this photo as an early warning of what would happen to the country if she ended up as Prime Minister. What kind of person would enjoy such a dish? Someone who shouldn’t be trusted, that’s who.

A few people on the internet have uncovered a conspiracy theory in connection to this post and Truss’s resignation. Some believe Truss’s short-term position was thanks to the Italians who saw this post. They made sure Truss would fail as Prime Minister and have her resign on #PizzaThursday as a reminder of her crimes against pizza.

Truss came to power after Boris Johnson resigned from the position and was voted in by her party following a leadership contest. The now-former Prime Minister became unpopular with the general public after her mangled response to the energy crisis and other political decisions that harmed the country financially. The Conservative Party will undergo another leadership contest to find someone who will replace Truss as the country’s Prime Minister.

If the Conservative Party needs any advice on selecting their next leader, please look at their social media posts. Maybe one of their ‘innocent’ and ‘quirky’ photos could give early signs of what’s to come if given the power to run a country.