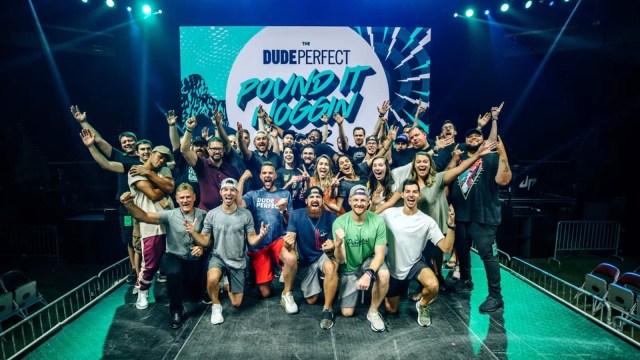 The folks behind the popular YouTube channel Dude Perfect are turning their success into an expansive Disney-esque attraction. They plan on upgrading to a $100 million headquarters designed as a one-stop shop for everything Dude Perfect. If you are unaware of the channel which boasts over 58 million YouTube subscribers, they often make sports or sports adjacent trick shots and record-breaking videos. If they have a target and a ball, they will probably make a great video out of it.

But with the announcement of a new headquarters comes plenty of questions, like where is it going to be built, and what exactly will it contain? Let’s unpack what we know about the upcoming trick-shot dreamland.

In the video above, you can check out what the upcoming headquarters will look like when it eventually opens to the public. As you can see the building is poised to be quite large, boasting a 330-foot tall trick-shot tower for the most epic of trick shots. That is not the only trick-themed attraction to get excited about, the headquarters will also be decked out with what they are calling Crazy Mini Golf, pickleball courts, and an amazing sounding ‘Trick Shot Town’.

If you are obsessed with the brand, look up to the Dudes, or are just interested in the history behind the channel, there will also be a Dude Perfect museum. And if you become famished walking around the headquarters, there will be restaurants and a merch store for fans to indulge their consumer appetites. The impressive facility will also be home to two acres of outdoor space, which will undoubtedly aid in trick-shot shenanigans.

So where will the headquarters be built? A site for the project has not been announced as of writing. However, the Dudes did let it slip that they would like to keep the headquarters close to where they are currently located, in North Texas in the United States. Although the project could move somewhere else if states try hard enough to entice them to build it there.

What started as a group of friends making trick-shot videos in their yards has resulted in one of the biggest YouTube channels and brands, and when this project finally finds a home, a $100 million theme park. And that theme park looks like exactly what fans of the channel would want, large open spaces and plenty of room for balls to fly around. We will most likely know more when the project gets off the ground but for now, we wish the Dudes good luck.