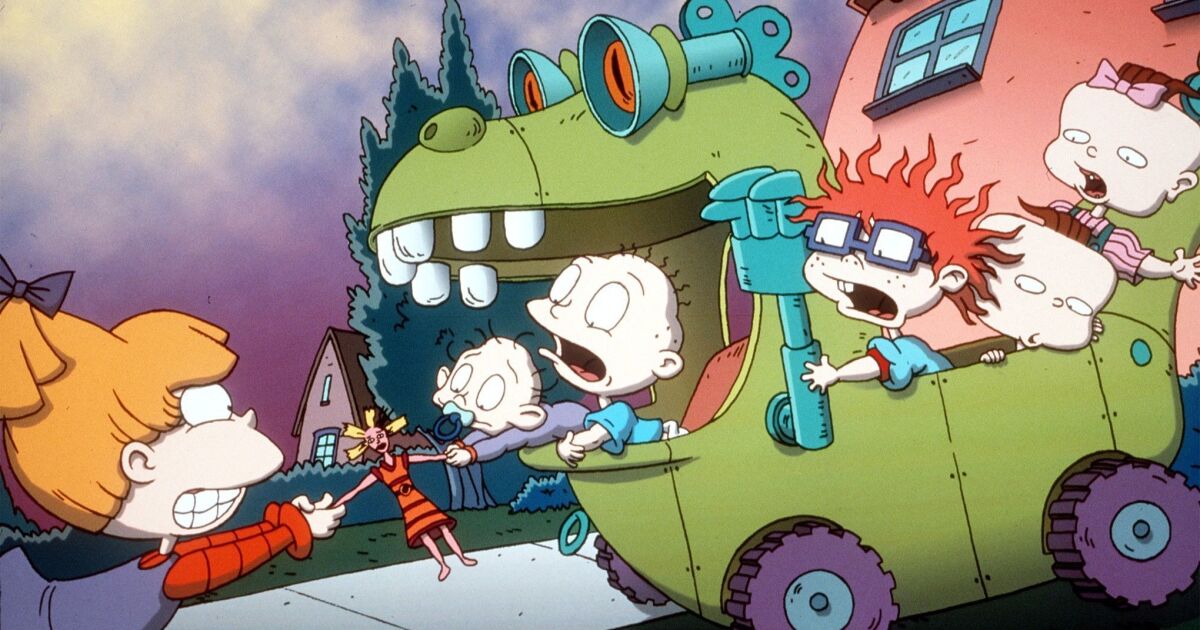 Have you been feeling nostalgic for the ’90s lately? We don’t blame you if you have. Many adults alive today who lived through the best decade of all time can agree that it gave us some of the best animated entertainment ever created, providing ’90s kids with a wonderful compendium of characters and stories that actually made them want to wake up early on Saturday mornings.

Newer cartoons tend not to have the same level of humor and intrigue as the ones that were released back in the good ol’ days, which is why we suspect so many now-classics are slowly but surely being revisited on platforms like Disney Plus and HBO Max. Thanks to some unforgettable characters and hilarious plot lines, ’90s cartoons like the 10 on this list will take you right back down memory lane and help you keep those nostalgic years alive.

Recess premiered in 1997 and tells the story of six fourth-graders enrolled at Third Street Elementary School. The group of rebellious kids is made up of TJ, Gus, Ashley, Vince, Mikey, and Gretchen, and although the pals are all quite different in terms of their hobbies and interests, they still somehow get along and enjoy linking up when the bell rings for recess.

One of the primary antagonists on the show is a troubled student named Randall who loves to snitch on the kids in order to get attention from the adults. In reality, Randall likely just wishes he was able to fit in with the other kids. Since he feels ostracized, he responds by constantly tattling to the teachers, mainly the grouchy Miss Finster. The potential love story between Ashley and TJ comes up in a few episodes of the show, adding an intricate layer to the show’s details. Come for the drama, stay for Recess.

Rugrats is one of the best animated shows of all time and a true staple of the ’90s. It was created in 1991 and lasted for nine amazing seasons, following a group of babies and toddlers who can communicate with each other despite their young ages. The main characters are Tommy Pickles, Chuckie Finster, Lillian Deville, Phil Deville, and Angelica Pickles. Unfortunately for the babies, Angelica insists on getting her way by any means necessary, even if it means bullying and lying.

From the perspective of the babies on the show, everything in the world looks more mysterious, more out of their control, and larger than life. In 2003, Rugrats got a spinoff called All Grown Up that lasted for five seasons. The spinoff shoots forward into the future so viewers can see what the babies are like as young teenagers attending middle school and coming of age. A quarantine re-watch would certainly evoke some memories from your youth and maybe even inspire you to follow up with All Grown Up.

Pokémon is an adventure series that premiered in 1997 and went on to become hugely successful, with over 18 consecutive seasons under its bet. The anime tells the story of Ash Ketchum, a 10-year-old boy who goes on adventures all over the world to collect Pokémon and become a certified Pokémon trainer. Along the way, he becomes friends with other trainers who have similar interests, most notably Misty and Brock.

Ash also interacts with a police officer named Officer Jenny and a healthcare worker named Nurse Joy to help him stay on track. The first-ever Pokémon movie was released in 1998 and many more have been released since then. Video games have been designed in honor of this awesome ’90s show as well, and it’s highly unlikely that the story of Pokémon will ever die down or go away since it has such a devoted fan base.

Dexter‘s Laboratory premiered in 1995. The show focuses on a boy genius named Dexter who figures out how to design world-saving inventions in his top-secret laboratory. One of the biggest obstacles in his way throughout almost every single episode is his annoying older sister, Dee Dee. A source of constant frustration, her heart is in the right place but she seems to have made it her life’s work to distract Dexter from his work.

Dee Dee is considered super problematic in Dexter’s eyes because she constantly wrecks his experiments when he’s on the brink of a breakthrough. The person Dexter is even more worried about than his older sister, though, is his arch-nemesis, Mandark. Since Mandark is thought of as the smartest kid on his campus, he’s Dexter‘s natural rival. Interestingly enough, even though Dexter‘s laboratory is connected to his home, his mom and dad have no idea what’s going on behind closed doors. Echo boomers will certainly enjoy a re-watch.

Just like Dexter’s Laboratory, Johnny Bravo premiered in 1995. These days, some people might consider the show a tad misogynistic, but at the time it was considered downright hilarious. The title character is fun to watch since he’s brimming with confidence and convinced that every woman he meets will fall head-over-heels in love with him, which, spoiler alert, doesn’t ever happen.

Bravo is loosely based on the real-life personae of James Dean and Elvis Presley, but his big blonde hair, tight black T-shirt, and light blue skinny jeans make him a unique and instantly-recognizable character all his own. Showing off his muscles, letting the world see his (wannabe) karate moves, and flirting with the ladies are his favorite things to do, and re-watching this series is about to become one of yours.

Just like Recess, Hey Arnold! focuses on a group of fourth-graders, only this time they’re living in the low-income neighborhood of Hillwood. Arnold has a football-shaped head which greatly impacts his life and even causes him to face quite a bit of bullying. He’s being raised by his grandparents, Phil and Gertrude, and viewers are never informed about what happened to his mother and father.

Some of Arnold’s school friends include Gerald Johansson, Rhonda Wellington, Eugene Horowitz, Lila Sawyer, and Brainy. One of the mean kids on campus who gives him a hard time is named Harold Berman. Regardless of the bullying and hardships Arnold faces, he always comes out on top because of his positive attitude. Adults raised in any era would enjoy this series.

SpongeBob SquarePants premiered at the tail end of the ’90s in 1999 and focuses on a square-shaped yellow sponge named SpongeBob SquarePants who works at a fast-food restaurant called the Krusty Krab. He lives in a pineapple at the bottom of the sea with his pet snail, Gary. Living life in Bikini Bottom is fulfilling for someone like SpongeBob, who always sees the bright side of things thanks to his genuine optimism.

When he’s not busy flipping Krabby patties, he’s hanging out with his best friends Patrick Star and Sandy Cheeks. His boss Mr. Krabs is extremely greedy, but SpongeBob doesn’t seem to mind at all. His co-worker Squidward is facing a deep depression, but again SpongeBob doesn’t let that negative energy get him down. The show is still currently on the air today and has had multiple spin-off series in addition to films.

For six seasons, starting in 1998, the little fighters on The Powerpuff Girls proved themselves to be one of the most “powerful” female fighting squads ever. Viewers get to watch Blossom, Bubbles, and Buttercup work together to fight back against bad guys like Mojo Jojo. They exist because their father, Professor Utonium, accidentally created them in a lab, and even though they were created by accident, they use their powers to fight for justice every chance they get. This show is worth re-visiting or discovering for the first time regardless of your age.

Courage the Cowardly Dog is an adventure cartoon that premiered in 1996. It’s about a shy pink-colored dog named Courage who struggles with paranoia and anxiety problems. He is paranoid about almost everything. Whether he hears a scratch at the door, sees a stranger approaching, or thinks the wind is blowing too loud, he gets instantly freaked out.

He lives on a farm with an elderly couple, which sounds like a simple place that would be generally calm and easy-going. Unfortunately for Courage, bizarre scenarios are always popping up, from ghost attacks to paranormal spirits trying to take over his home. Since Courage is generally scared of everything, having to go head-to-head against supernatural spirits and ghosts is the last thing he wants to do, which makes for plenty of enjoyable entertainment.

Bob the Builder premiered in 1998. It lasted for 20 seasons until its cancellation in 2017. Bob is a construction worker who knows how to handle any project laid out in front of him. He’s able to keep a positive attitude and stay in a good mood regardless of what’s going on around him. His friends Dizzy the Cement Maker and Mack the Dump Truck help him complete his many projects around town.

Bob’s business partner Wendy is constantly by his side helping him out whenever he needs assistance. In 2014, the animation for Bob the Builder was revamped to look fresher and newer. This cartoon series was definitely created with young audiences in mind, but the show creators made sure it was still interesting enough for parents to enjoy as well. The message of “Can we fix it?” will resonate with millennials and, honestly, any generation, especially in this day and age.

Whether you’re familiar with all of these classics or some of them are new to you, all come highly recommended as shows that offer the best of the ’90s and are therefore well worth a(nother) watch.