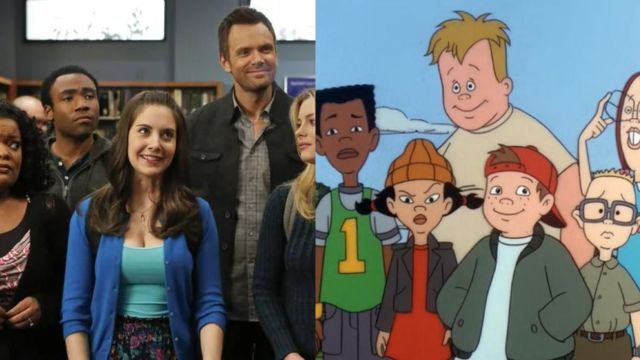 Community premiered on NBC in 2009 and lasted until 2015, with its final season airing on Yahoo! Screen. The series follows six friends (originally seven) at a community college. Recess premiered in 1997 as part of Disney’s One Saturday Morning and ended in 2001. The series follows six friends at an elementary school. The similarities don’t stop at synopsis. Setting, character, and plot nuances are shared by both shows, making us wonder if the creation of Community came after a quick Recess.

Community‘s Greendale Community College and Recess‘ Third Street School are not like other academies. Greendale was built on an abandoned meat rendering plant, didn’t have a roof for its first three years, was embroiled in a sex scandal involving its founder and a computer program, and gave an honorary degree to a former Panamanian dictator. Third Street began operation in the 1920s, having been ruled by student-kings ever since the Great Depression. It even housed a tractor beam meant to reposition the moon in order to start a new Ice Age and keeps a tribe of kindergarteners interned.

The schools’ bizarre histories sowed mysteries that their respective students uncover. In “Basic Sandwich,” the Community gang find Greendale’s founder alive in his lab despite it being sealed up for decades. In “The Library Kid,” the Recess gang free a girl who has been hiding in the library for years. “Aerodynamics of Gender” follows the Community crew as they discover a secret garden on campus that contains a euphoria-inducing trampoline, while “Teacher’s Lounge” shows the Recess squad embarking on a quest to enter the titular room, which is a secret oasis accessed with a decoy coffee maker. Moreover, the teachers’ lounge in Community is inversely idyllic with booze, cigars, poker, and a prohibition of Dean.

Each show’s friend group has a clever and charismatic leader: Jeff in Community and T.J. in Recess. In Community, the strong, independent female who harbors a crush on the leader is called Britta. In Recess, her name is Spinelli. Abed, the quirky outsider in Community, mirrors Recess’ Gus. Annie, the brainiac, mirrors Gretchen. Troy, the athlete, mirrors Vince. Rounding out the gang is Shirley, the heavy-set, warm-hearted singer, who is analogous to Mikey. The only main Community character that doesn’t have a Recess counterpart is Pierce, and he left the group in Season 4.

Even secondary characters have doppelgängers. Greendale’s narcissistic Dean Pelton is a balder Principal Prickly. Chang, an explosive teacher at Greendale, is a dead ringer for Miss Finster. But you can make a case that Randall Weems, the schoolyard snitch, is Chang’s true double. Interestingly, a bully character that appears in Community creator Dan Harmon’s other show, Rick and Morty, looks an awful lot like Randall.

In both shows, minor characters are referred to by their characteristics rather than their names. Community‘s cast of curiously-coined side characters include Star-Burns (named after his star-shaped sideburns), the Germans (named after their nationality), and the Black Rider (named after his black, cowboy-inspired getup). Recess‘ close counterparts include Baby Tooth (named after his one remaining deciduous tooth), the Pale Kids (named for their pallor), and El Diablo (Gus’ outlaw alter-ego).

References to the same movies/TV shows

Community and Recess drew inspiration from the same media, going so far as to base entire segments—and, occasionally, episodes—around such movies/TV shows. The Recess episode “Schoolworld” is an explicit parody of 2001: A Space Odyssey centered on a sentient school security system called SAL 3000. In Community‘s “Biology 101,” Jeff gets knocked out and hallucinates the final scene of 2001 with himself as Bowman, Pierce as Bowman’s older self, and the study room table as the monolith. Both series have parody episodes of Good Will Hunting (“A Genius Among Us” in Recess and “English as a Second Language” in Community) and both reference the OG playful band of misfits series Hogan’s Heroes. Allusions to The Good, The Bad And The Ugly permeate each show’s Wild West-style episodes, which we’ll cite in the next section.

Many Community plotlines, some spanning several episodes, are identical to those found in Recess. The episode “Interpretive Dance” turns Troy and Britta into unlikely dance partners, which parallels Mikey and Spinelli’s storyline in the aptly-titled “Dance Lessons.” In a Season 3 multi-episode arc, Chang ascends to the top of the school hierarchy just like Randall when he becomes prince of the playground in “Prince Randall.” School-wide competitions treated with warlike seriousness, such as the paintball games in “Modern Warfare,” “A Fistful of Paintballs,” “For a Few Paintballs More,” and “Modern Espionage,” did not originate in Community. “Dodgeball City,” “The Trial,” and “One Stayed Clean”—Recess episodes that aired over a decade prior—similarly sensationalize dodgeball and mud fighting.

We don’t know if these similarities are coincidental, accidental, or intentional—and if they are intentional, we wouldn’t accuse Community’s writers of anything other than paying homage. All we know is the satisfaction that comes when one of our favorite shows during childhood is so much like one of our favorite shows during adulthood (people who were elementary school-aged during Recess’ run were college-aged during Community’s). Perhaps nostalgia for the former contributed to the popularity of the latter.