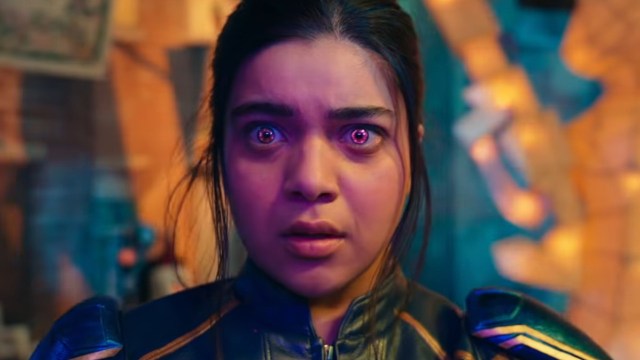 All season, MCU fans had been grumbling about the way Ms. Marvel had erased Kamala Khan’s comic book origins, ditching her ties to the Inhumans in favor of making her the descendant of a djinn. While today’s season (series?) finale didn’t go so far as to bring back her Inhuman backstory, it arguably did one better by tying the heroine into another superhero group that fans cannot wait to see enter the fray.

Episode six’s first tag scene sees Bruno (Matt Lintz) admit to Kamala (Iman Vellani) that he’s made a further study of her genes and has discovered the reason why she’s the only one in her family who gains powers from her great-grandmother’s bangle. Bruno reveals that there’s “something different” about Kamala’s genetic make-up, like “a… mutation.” There’s only one thing this can mean.

Yes, it looks like Kamala has been retconned as a mutant, not an Inhuman, in the MCU. And just in case it wasn’t clear from the dialogue, a very familiar theme plays over Bruno’s words. When he says “mutation”, the opening few notes of the iconic X-Men: The Animated Series theme tune can be heard. And the ’90s kids out there cannot handle it.

Mutation… it is the key to the MCU’s survival.

The mutants are coming.

Just in case you thought you were hearing things, the episode’s credits confirm that this was a sampling of the X-Men theme. So it seems official: Kamala really is a mutant.

Does that mean we’re getting more X-Men rep in The Marvels?

Time for the edits to start rolling in.

After its usage in Doctor Strange in the Multiverse of Madness, when Patrick Stewart’s Professor X appeared, it seems we can safely say that the classic X-Men theme is going to be the MCU’s official musical cue for the mutant team, much like how Spider-Man: Homecoming brought back the ’60s Spidey theme. Now we just need the gang to actually turn up.

All episodes of Ms. Marvel can be streamed on Disney Plus.