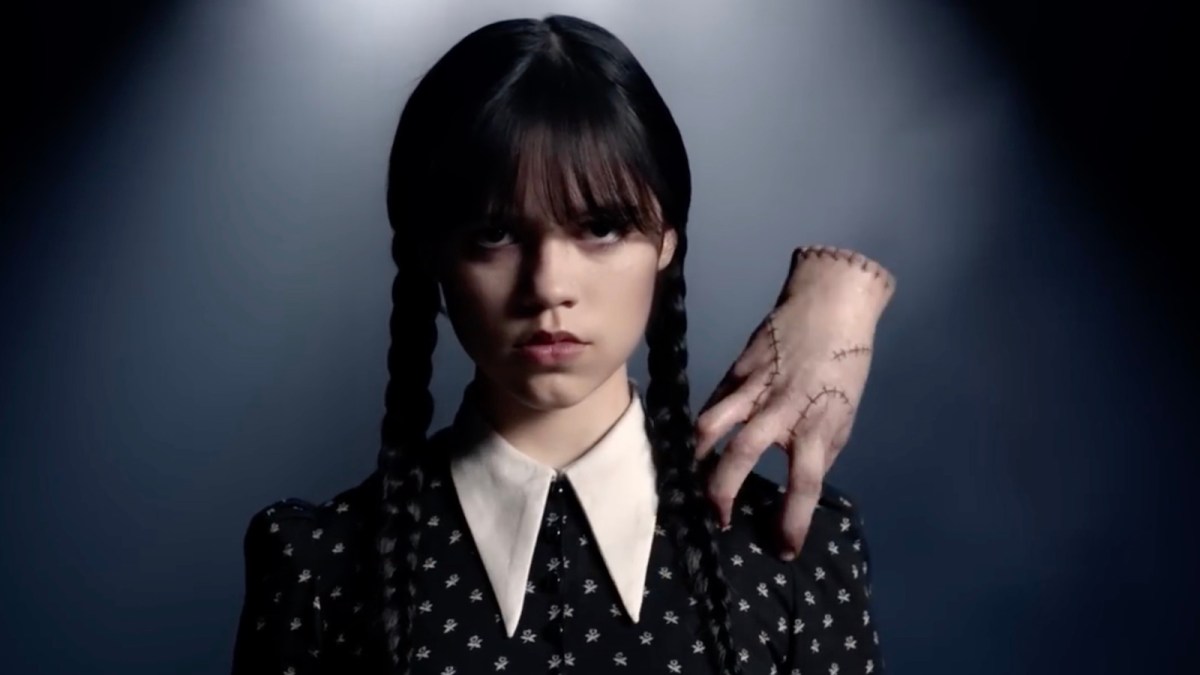 The latest show on Netflix to get excited about is Wednesday. The show focuses on Wednesday Addams, one of the most beloved classic characters from the Addams family. The Addams family has been around for decades with the first-ever movie premiering in 1991, the famous TV show debuting in 1964, and the cartoons that started it all dating back all the way to 1938.

People who enjoy holidays like Halloween and entertainment that provide a creepy vibe can agree that the Addams family is an incredible fictional bunch to keep up with. Here’s who makes up the cast of characters on Netflix’s Wednesday.

Jenna Ortega is the young actress who’s taken on the titular role on Wednesday. TV lovers recognize Jenna from some of her other major roles including Stuck in the Middle on Disney Channel. She landed the leading role in that show from 2016 to 2018 as the middle child in an incredibly large family.

Jenna also starred in Scream in 2022 as well as the second season of You on Netflix alongside Penn Badgley. Another early role in Jenna‘s career was in Jane the Virgin as the younger version of Jane.

Morticia Addams is known for being the drop-dead gorgeous mother figure in the Addams family. In Wednesday, she’s played by none other than Catherine Zeta-Jones. It’s easy to recognize Catherine from her lengthy filmography which includes movies like The Legend of Zorro, Chicago, and High Fidelity. Morticia has a reputation for being beautiful in a spooky way, and Catherine pulls off the character effortlessly.

Gomez Addams is played by none other than Luis Guzmán in Wednesday. Not only is Gomez supposed to be Wednesday’s father, but he’s also supposed to be the doting husband of Morticia. Wednesday spends the majority of her time in season one trying to unravel the creepy mystery that her father is connected to.

He’s involved in some very deadly and haunting things –– and Wednesday is interested in peeling back all of the layers. It’s likely that TV lovers recognize Luis from roles on shows including Narcos and Shameless.

Uncle Fester is played by none other than Fred Armisen in Wednesday. One thing that fans of the Addams family all recognize is the fact that Uncle Fester is one of the weirdest and most eccentric characters of all time. The perfect actor had to be selected to pull off such a kooky role, and Fred was certainly up for the challenge.

Since Fred is such a comedic star, he never misses a beat while taking on the persona of Uncle Fester. Even though Wednesday is gun-shy when it comes to trusting the adults in her life, one thing she knows will always be certain is that Uncle Fester has her best interest at heart.

Since he has such in-depth knowledge when it comes to the knowledge of dark arts, she knows that she can rely on him to tell her some of the most nitty-gritty secrets ever. Portlandia and Saturday Night Live are some of the places fans recognize Fred from prior to landing his role as Uncle Fester. You might’ve also caught him in episodes of New Girl and Brooklyn Nine-Nine in the past as well.

Wednesday’s younger brother is named Pugsley Addams. In Wednesday, Pugsley is played by a young actor named Isaac Ordonez. Even though Wednesday is more comfortable hiding behind a cold-hearted and tough exterior, the one person she has a soft spot for happens to be Pugsley.

Since he’s her little brother, she has a natural instinct to protect him from bad things and shield him from any damage that might come his way. Wednesday doesn’t soften up for friends, crushes, teachers, or other family members. Pugsley is the one person she’s willing to go to bat for. Isaac hasn’t appeared in any other major roles so far, making Wednesday his true debut.

This time around, she is playing Marilyn Thornhill in Wednesday. Marilyn happens to be the only totally normal teacher at Wednesday’s school. Even though all the other teachers she works with are beyond strange, she doesn’t care to go out of her way to stand out.

Instead, she lives her life in a way that makes her feel the most comfortable by trying to connect with her students. One of her greatest goals is to gain Wednesday’s trust, which isn’t something that happens overnight. Along with playing memorably playing Wednesday, Christina has also starred in Yellowjackets and The Matrix Resurrections.

One of the first places viewers recognize Gwendoline Christie happens to be Game of Thrones on HBO where she had one of the most epic roles ever, playing the role of Brienne of Tarth. Brienne was tall, mighty, and strong, and her goal in life was to protect the lives of the Stark girls no matter what or who got in her way. Now, she is the principal at Wednesday’s school. Interestingly enough, Principal Larissa is supposed to be a childhood rival of Morticia, adding to the intricate layers of drama.

Wednesday has a therapist in the show named Dr. Valerie Kinbott. She is played by none other than Riki Lindhome. Getting a student like Wednesday to open up about her emotions isn’t a simple or easy task, but it’s something Dr. Valerie dedicates her time and attention to. Riki is an actress who has also appeared in shows like The Big Bang Theory and movies like Knives Out.