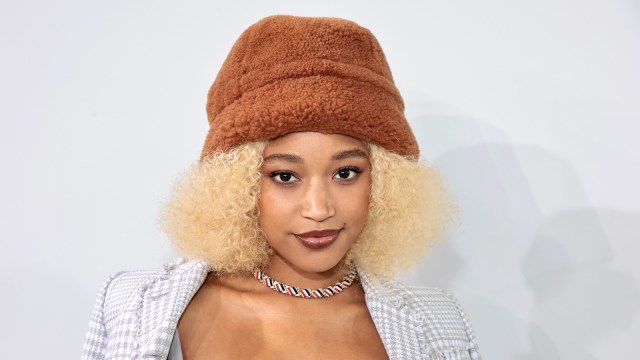 Amandla Stenberg is officially joining the Star Wars universe, and it sure looks like she’s on the Dark Side. In a joint post, Stenberg and the franchise’s official social media accounts announced her new “mystery-thriller” series, The Acolyte, will be coming to Disney Plus.

“Next stop: a galaxy far, far away…” wrote the actor. “I am so excited to finally announce I’m joining Star Wars: #TheAcoyte !
Honored is an understatement. May the Force be with you 🖤” — note the black heart.

Stenberg (who is non-binary and uses both they/them and she/her pronouns) may have their arm around R2-D2, but this might be a keep your enemies closer situation as Darth Vader is nearby and in another shot, Stenberg looks to him with reverence. Oh yeah, and that outfit! The Hate U Give actor looks pretty ready to disperse some intergalactic enmity in a Darth Maul tee, red hair, a leather skirt, and leather boots.

The project was previously announced back in 2020 with Russian Doll co-creator Leslye Headland.

“Leslye Headland, Emmy Award-nominated creator of the mind-bending series Russian Doll, brings a new Star Wars series to Disney+ with The Acolyte. The Acolyte is a mystery-thriller that will take the audience into a galaxy of shadowy secrets and emerging dark side powers in the final days of the High Republic era.”

In Dec. 2021, We Got This Covered reported that Stenberg was set to star, so it’s been an open secret for a while.

Stenberg kept the scarlet and leather theme going throughout the day, opting for dramatic sleeves and a snakeskin-accented skirt aboard the IMDB yacht.

You might have seen Stenberg, who has also built a reputation for herself as an activist, in The Hunger Games or Beyoncé’s visual album, Lemonade. If you want to check out more Stenberg’s work and have a taste for the macabre, you’re in luck, because she co-stars in the buzzy A24 horror comedy Bodies Bodies Bodies coming to theaters Aug. 5