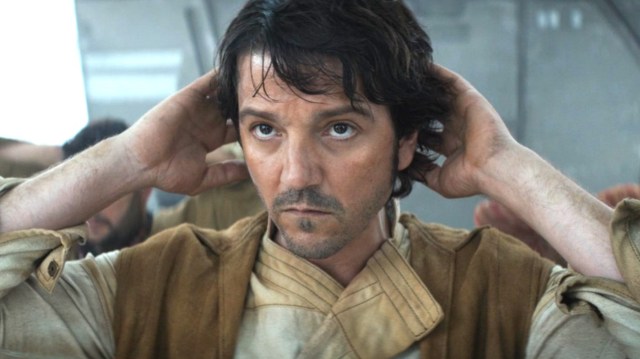 We’re now ten episodes into Andor with just two to go and so far nobody has said the word “Jedi”, mentioned the Force even in passing, or referenced Darth Vader. This is entirely in keeping with the show’s ambitions for a grounded adventure with genuine stakes and it can’t be denied this is extraordinarily exciting TV that wouldn’t be improved by someone swinging a lightsaber around.

But some fans have their eye on one of the major characters and have spent weeks theorizing that they’re secretly a Jedi who survived Order 66. This is Stellan Skarsgård’s Luthen, a key mover in the early days of the Rebellion with a ruthless but necessary outlook on fighting the Empire.

This week has only stoked speculation, as we meet him looming in a dark cape gently blowing in the breeze while delivering a moving monologue about philosophical and moral sacrifices. Beyond that, his antique store is full of Jedi and Sith artifacts and he gave a Kyber crystal to Cassian Andor in the early episodes.

Fans think they may have his number:

Even if he’s not a fallen Jedi he’s certainly sounding like one, with a fan pointing out that:

“Yeah the wording of that speech put me on the “Luthen is a jedi” theory hypetrain: sacrificing being calm, giving up inner peace sharing his dreams with ghosts, saying he is damned for what he does…and his first example is his anger.”

Is this a surprisingly productive fall to the Dark Side?

For some the evidence is so strong they’re convinced:

The counterpoint is that Andor doesn’t seem to be a show with huge twists and major reveals, and making Luthen a former Jedi might spoil his character:

Could he be merely somehow linked to the Jedi Order rather than a part of it?

It’s worth pointing out that if Luthen is a Jedi, then it wouldn’t have been a smart move to remain on Coruscant after Order 66. After all, the Empire almost certainly has records of all former Jedi after they seized the temple and his public-facing antiques dealer persona seems to be fairly well-known to the elites.

Then again, as someone with a large collection of Jedi artifacts, maybe he simply worked in the library and was able to purge himself from the records before the Empire arrived. We’d prefer Luthen to simply be what he appears to be: a man committed to bringing down the Empire by any means necessary, though by now Andor has earned our trust and if they’ve got a secret Jedi reveal coming up we’re all for it.