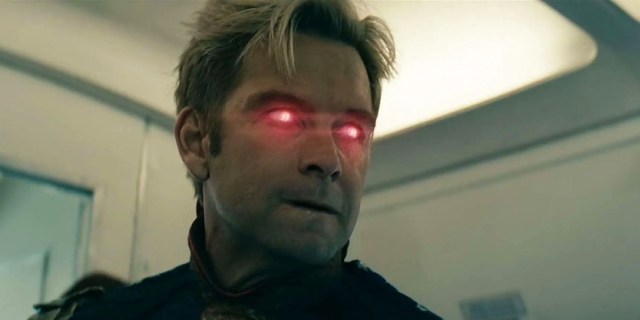 Over the The Boys‘ three seasons, Antony Starr has carved out a richly deserved spot as one of the greatest characters in modern television. His deranged Superman analog Homelander is as fascinating as he is evil, a truly multilayered villain who elevates every scene he’s in.

Starr is so great as Homelander that it’s sometimes difficult to separate him from his character, as perhaps proven by this extremely fun edit that recently appeared online.

During the October 2021 panel at the New York Comic-Con Starr was interrupted by his co-star Chace Crawford. As he patiently waits for Crawford to finish, the video shows his ‘frustration’ by fading into the imaginary scene in which Homelander fries a crowd of protestors with his laser vision.

Starr reposted the video yesterday, describing it as “so so good”:

The Boys‘ third season continued the show’s reputation for top quality superhero drama while also laying the ground for a satisfying finale a couple of years down the line. Eric Kripke has indicated that his ideal plan for The Boys would be to wrap things up at the end of season five, and given that this is still Amazon’s most popular show (until The Rings of Power anyway) we expect those ambitions to be fulfilled.

But whatever else happens we want to see as much of Antony Starr’s Homelander as possible. Every single moment with him on screen has been solid gold and even though he’s among the most despicable characters on TV we’re going to miss him when he’s gone.

Let’s hope The Boys doesn’t stay away for too long.

The Boys‘ third season is available on Amazon Prime.