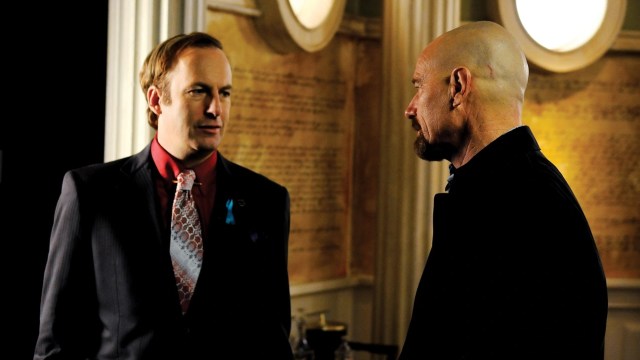 While the crime-fueled drama series Better Call Saul — which serves as the spin-off series of Breaking Bad — is comprised of many unexpected twists and turns that leave fans in awe. There is perhaps no greater anticipation than for the return of Bryan Cranston as the incomparable Walter White — the infamous high school chemistry teacher that relied on cooking crystal meth to financially support his family after a deadly cancer diagnosis. Now, Cranston himself is taking his golden opportunity to tease fans ahead of his long-awaited return.

While speaking with Radio Times, Cranston dished on his much-anticipated cameo, where he talked about the ins and outs of his appearance alongside Aaron Paul being kept a secret — revealing that the two men were secretly kept in an Airbnb in New Mexico last April while filming their scenes in the sixth and final season of Better Call Saul.

It was surreal. Aaron Paul and I, we had to coordinate our schedules to make sure we were available when they were in production. So a year ago, April, is when we shot it. And because it was a separate section of us shooting the scene, I don’t know what actual episode it’s in. Because it wasn’t done in order.

We were flown into New Mexico secretly and they created this shroud of privacy – we were sent right away to an Airbnb house that we were not allowed to leave. There was all this stuff going on, it was exciting! But also a secret and we kept it secret for a year. And then when Better Call Saul premiered they announced it, and Aaron and I said: ‘Oh, well, I guess we can talk about it now!’

For some background, White eventually crossed paths with Saul Goodman in season two of Breaking Bad, but by that time, Jimmy McGill (which is Saul’s actual name) was already dead in the water, with the “criminal” lawyer actively working under a new alias. When White and Goodman meet, the two develop a close professional relationship, where Goodman works as White and Jesse Pinkman’s (Aaron Paul) lawyer.

In recent months, rumors had circulated that Cranston and Paul were going to make an appearance in Better Call Saul’s final season. And after the duo were officially confirmed in April, fans of the Breaking Bad universe have been pining for the pair’s return — which appears to be sooner rather than later.

The final six episodes of Better Call Saul premieres on AMC on July 11.