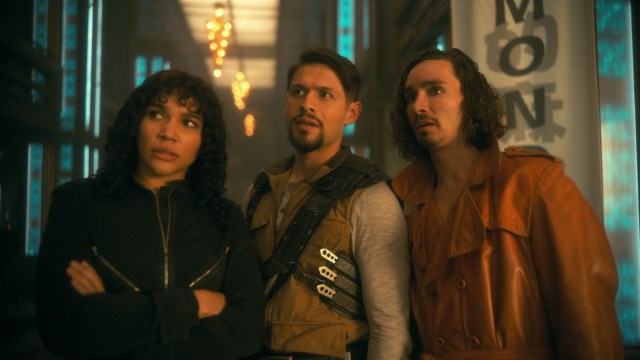 When fans were done binging The Umbrella Academy season two last summer, the common hope was that the next season would work to solve its countless convoluted mysteries. But the recently released season three once again leaves us trying to wrap our heads around the enticing puzzles served by the series’ mind-bogglingly ingenious plotline. But while some questions are staring us right in our faces and may have some plausible answers, many aren’t so easy.

So, in order to ensure that you brainstorm the hell out of the loose plot threads left hanging this time, we have condensed together a list of all the mysteries that remain unsolved in season three and their possible answers:

What’s up with Grace and her sudden religious fanaticism?

There is no denying that Grace, the robot Reginald Hargreeves modeled after his past lover, isn’t exactly a normal robot. But in season three, she leaves her category as an “extraordinary robot” to being downright weird without providing any sensible explanation to back her mindless actions.

This time, Grace is not “Mother” to the new Sparrow Academy and is instead a mere maid. But what really bakes our noodles is when she quietly moves the time-travelling briefcase that Number Five was carrying to the basement and starts worshipping the Kugelblitz — the world-annihilating black hole — which she perceives as a message from God himself. She even tries to kill the Hargreeves when they attempt to contain this destructive ball of energy. What is fueling this sudden religiousness in a robot?

Was she acting on Reginald’s orders as he has been harbouring a mysterious alternative agenda since the first season? Did he instruct her to stash the briefcase in the basement and protect the Kugelblitz at all costs in order to push the two Hargreeves families into coming together for the final showdown in the season finale?

What is the “Jennifer incident?”

One of the biggest ongoing mysteries since the first season is how did the original Ben (of the Umbrella Academy) die? In the first two seasons, all we received were scattered clues that hinted that he died at the age of 17 in a mission that went sideways. And the newly debuted season only serves to further thicken the mystery.

After meeting and engaging with the rather unlikeable version of Sparrow Ben, Luther and then Klaus refer to a particular “Jennifer incident” that took place in their timeline and was the reason behind OG Ben’s death.

What makes this more puzzling is when a heartbroken Viktor takes refuge in Ben’s bedroom after a particularly tiring argument with Allison, we see a number of handmade drawings of a girl named Jennifer adorning the walls. Looks like, despite the widely different timelines of the Umbrellas and the Sparrows, both share one common thread – Jennifer.

So, in one timeline this girl contributed to Ben’s death and in another, she is nothing more than a drawing that shows the seemingly icy alternate Ben’s softer side? There is no denying that she was someone important in Ben’s life in both the timelines. Maybe the OG Ben died saving her while the Sparrow Ben was unable to do the same and her untimely death caused him to assume the zero-fucks-given attitude he flaunts in the initial episodes? But given The Umbrella Academy’s track record, we are sure that the answer isn’t going to be that simple.

How could Harlan sense only the Umbrella Academy members before they were born?

It is revealed that Harlan inadvertently tried to connect with Viktor when he first started taking form in his mother’s womb on October 1, 1989, and ended up killing the mothers of all the members of the Umbrella Academy (sans Ben’s mom) as they couldn’t handle the power flowing through him via the connection. He reveals in the fourth episode that his powers allow him to sense when any superpowered being like Viktor is near him.

But why could he only sense the other Umbrellas and not the remaining superpowered children born that day? Why didn’t he end up killing them all or at least more of these specially chosen women? Is it because the other five members were also there on that fateful day in 1963 when Viktor unknowingly gave Harlan powers? But wasn’t Lila there too? Also, how is this possible that none of the other about-to-be-very-pregnant women were near Harlan? How does this particular plot point work out?

In the original timeline, 43 superpowered children were born on October 1, 1989. But in the new timeline, only 16 were born on the day. While Harlan killed Viktor, Klaus, Luther, Five, Allison, and Diego’s mothers, what happened to the other 21 children who were present in the OG timeline?

Though it is never explicitly highlighted, did Harlan end up killing their mothers too? This would actually make answering the last question a lot easier as in this scenario, one can say that Harlan didn’t miraculously sense just the members of the Umbrella Academy before they were born as he killed many more women and only a few managed to escape his unintended wrath.

Why did Reginald stop Klaus from entering Hotel Oblivion?

After pretending that the armoured samurai from Hotel Oblivion came and killed Luther, Reginald hurries his children to enter the secret door. But at the last moment, he stops Klaus from entering, claiming that he is “more trouble than he is worth.” What did he mean by that? How could Klaus — whose head is always in the air — have botched up Reginald’s plan?

Is it because of his powers as they give him the option to come back to life no matter how gory his death is? But that doesn’t stop Reginald from using him when the time comes for the Hargreeves’ siblings to stand on the seven sigil points, as he instead stops Allison from joining the group, which brings us to…

Why did Reginald stop Allison in the season finale?

As Five finally discovers the mysterious sigil on the floor of the hotel just as the deadly samurai reappears once again, dead set on killing them, Reginald instructs them to stand on the seven points. But just as Allison tries to join, Reginald stops her and instead lets Five complete the sigil.

Was it because of the deal he had previously sealed with Allison? It has now been confirmed beyond any doubt that Reginald is only a cold-hearted alien who has no trace of any love for his “children.” So, did he really want to honor his deal with his so-called daughter and stopped her from joining the sigil knowing that it would kill her? Or did he know that even though she would kill him to save the others, she would still press the button that would reset the timeline?

What are the finer details of the Allison-Reginald deal?

At the end of the tenth episode, after the timeline is reset, we see Allison rushing home and finding her daughter Claire (who didn’t exist in the previous timeline). But what really drops all jaws to the floor is the appearance of Ray, Allison’s husband from back in 1963. Exactly what kind of deal did Allison sign with Reginald that gave her both Claire and Ray as well as spared her the harrowing experience that the others went through to power the otherworldly console used to reset the timeline?

Another pressing question is what did Reginald get from this deal? Allison wasn’t in on his plan to kill neither Luther nor Klaus. She also wasn’t aware that resetting the timeline would mean torturing the others and when she attacked Reginald, it was not planned as she acted to save everyone else. Was Allison walking into Hotel Oblivion willingly all Reginald was supposed to get in exchange for giving her the life of her dreams?

Where is Sloane and why did the Hargreeves lose their powers?

Once the timeline is reset, the Hargreeves stumble out of an elevator and into a garden, which was previously the ground on which Hotel Oblivion stood. But while Viktor, Klaus, Luther, Lila, Diego, Five, Allison (who had already left) and even the Sparrow’s Ben are there, Sloane is mysteriously missing. While her absence could have been written off as a side-effect of resetting the timeline which supposedly erased the newly created, Grandfather Paradox-infested timeline, the presence of the Sparrow’s Ben shoots down this possibility.

Thus, the mystery of Sloane’s disappearance still remains. Did Reginald take her with him? Is she still stuck in Hotel Oblivion which seemingly vanished from existence?

Another mystifying aspect is the Hargreeves losing their powers — Five can’t blip anymore, Luther isn’t… well, beefed up, and so on. How did resetting the timeline affect their powers? Is it because their powers fueled the resetting of the timeline? So, by that logic, does Allison still have her powers?

What on Earth was the point of Project Oblivion?

As revealed halfway through the season, Reginald made the Hotel Obisidian in the exact location where the creators of reality instituted a failsafe location, which is dubbed as Hotel Oblivion, to reset the universe in case something like the Grandfather Paradox threatened its existence. But the Reginald we have known since the first season has proved time and again that he has no one’s best interest at heart except himself.

While he does aid in saving the universe, there is bound to be an ulterior motive that hasn’t been revealed yet. In the last moments of the season finale, we see that the majority of the buildings have Reginald’s name in the new timeline as he looks upon the city from another high-rise building. What’s more is that he is soon joined by a woman — Abigail, his wife whom he lost years ago and someone we only met through a flashback in a previous season.

Was ruling the city and bringing his dead wife back to life the only agenda on his list or is there more?

Which Ben is it?

Season three bids farewell with this last incomprehensible puzzle piece. In the mid-credits scene, we see Ben (wearing glasses and decked out in a suit) sitting in a Korean subway train. The real mystery isn’t where he is headed but which version of Ben is it — the OG Ben or the Sparrow Academy Ben? Given the way his hair is styled and the calmness he exudes, it looks like the old Ben is back. Or maybe the new one has finally ditched his spiteful attitude issues?

Only the next season can answer these questions. So far, season four hasn’t received the green light from Netflix but given the popularity of the series, it is only a matter of time before it happens.

Till then, binge on The Umbrella Academy season three currently streaming on Netflix.