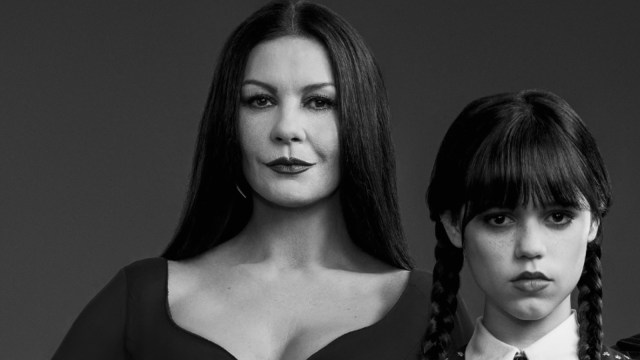 Catherine Zeta-Jones is turning heads with her reveal as Morticia Addams in the upcoming Netflix show Wednesday.

The Tim Burton-directed series will focus on Jenna Ortega’s Wednesday Addams, but the entire Addams Family will appear in the show.

Even though Anjelica Huston’s iteration of Morticia from the celebrated Barry Sonnenfeld duology of The Addams Family films from the 1990s will always remain iconic, fans were clearly on board for Zeta-Jones bringing her own spin to the character.

“I just know Catherine Zeta-Jones is going to eat up this Morticia role,” one fan wrote.

“Catherine Zeta Jones is the only one we’re staring at right now 🤩,” another Twitter user said.

Another Twitter user was simply baffled we haven’t seen more of Zeta-Jones in movies and TV shows in recent years, with her appearance as Morticia sparking “immense joy.”

“[S]he’s always been one of my favorite actors, missed her so much.”

Other fans indicated seeing Zeta-Jones in this capacity was making it hard for them to look away.

Zeta-Jones as Morticia is “the gift that keeps on giving,” according to one Twitter user’s assessment.

Even though Huston set quite a high bar with her portrayal as Morticia in the ’90s, Zeta-Jones appears to have “nailed it,” according to one fan.

Burton’s involvement in the world of The Addams Family was arguably a long time coming, as he was initially eyed for directing the 1991 film of the same name, which was eventually helmed by first-time director Sonnenfeld.

Check out Wednesday when the series hits Netflix later this year.