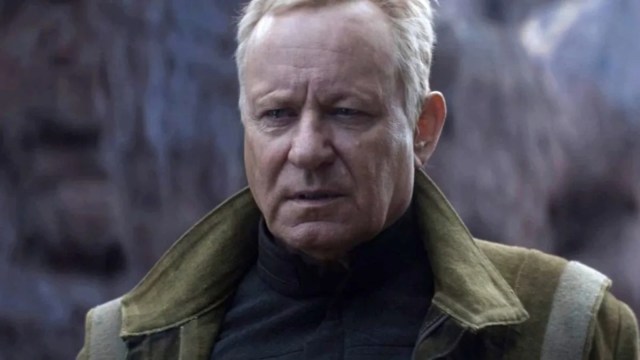 Image via LucasFilm
Review of:

The following article contains spoilers for the eleventh episode of Andor, titled ‘Daughter of Ferrix.’

While it does seem like a majority of Star Wars fans are not paying attention, Disney Plus is streaming Andor and it might just be some of the best Star Wars content that we have gotten in years. There are many reasons why the series has been getting critical acclaim from its intriguing interweaving political thriller storylines to its tremendous performances.

One of the performances that have been elevating the series is Stellan Skarsgård’s portrayal of Luthen Rael. We did not know much about Luthen before the series premiered and eleven episodes in, we honestly don’t know much more than we did at the start. But because of something suspicious he did in this last episode, one question needs to be answered, could Luthen be in possession of a lightsaber? Let’s unpack his actions in the series so far and speculate as to whether he might have a Jedi’s greatest tool.

Could Luthen have a lightsaber in ‘Andor?’

When Luthen Rael was introduced in Andor, he was quite mysterious, appearing to Cassian (Diego Luna) just as he needed him, leading him on his path to becoming the rebel spy we meet in Rogue One: A Star Wars Story. Eventually, we come to know that Luthen is quite a chameleon, masking his true feelings depending on who he is talking to. We know that he runs an antique shop in Coruscant, and we know that he is using his agents to damage the Empire, but other than that, we have been fairly in the dark.

As we have gotten through the first season, we have gotten a taste of just how expertly Luthen manages to weave through his web of lies, all while avoiding the grasp of the Empire. We received hints of how ruthless he can be, as we saw with his speech in the tenth episode with Lonni Jung (Robert Emms) and how he plans to let Kreegyr sacrifice himself and his group for one Imperial spy. When he journeyed to Saw Gerrera (Forest Whitaker) to tell him about the problem, he was frisked upon his arrival. They found one item in his possession, a cylindrical object, that is about the right size of a lightsaber.

The object looks like a mix of metal and wood, with grooves in the wood that are quite similar to the hilt of a lightsaber. While it could just be an ordinary spyglass, and Luthen could be using it for some spy activities, it does look an awful lot like a lightsaber. Although there is always the chance that it could be made from the same material as a lightsaber, hollowed out and fitted with a telescopic lens.

So could that object be a concealed lightsaber? Of course, it could, it is Star Wars after all. Now, we are not suggesting that Luthen Rael is a secret Jedi who survived Order 66, although with some of his actions and ability to influence people, he could certainly be force-sensitive. There is a slight chance that he could be a Jedi who left the Order or managed to survive Order 66, maybe due to the Empire’s oversight. But, however unlikely it might be, even if he was not a Jedi, it does not mean that he could not be in possession of a lightsaber.

We have already mentioned that Luthen has an antique shop in Coruscant, one that Mon Mothma has been frequenting to communicate with Luthen. Eagle-eyed fans have noticed that the set of his antique shop has been dressed with many objects throughout the history of Star Wars, including some of the video games, and that it even contains an easter egg or two from Indiana Jones. So it is not beyond the realm of imagination to think that Luthen might have been able to get his hands on a lightsaber.

After all, there were thousands of Jedi before Order 66 wiped them all out. And there were undoubtedly some lightsabers lying around Coruscant after they were slaughtered. It wouldn’t be too much of a reach to say that just like how Luthen got his hands on some of the more unique and one-of-a-kind artifacts in his collection, he was also able to procure at least one lightsaber for personal use. There is also the possibility that he was able to take the kyber crystal out of a discarded and unused lightsaber and fit it in his ship. As seen in episode 11, he was able to activate some sort of powerful laser that emanated from both sides of his ship like Darth Maul’s lightsaber. Although, it is doubtful that he managed to find a red-bladed lightsaber or manage to alter the color of the kyber crystal himself.

It is also Star Wars canon that shortly after the events of Order 66, the Empire celebrated the end of the Jedi Order with a very public showing of many lightsabers, including Grand Master Yoda’s, being thrown in an incinerator, resulting in their destruction. This event was covered and first depicted in the comic book Darth Vader #1 in 2017, written by Charles Soule and penciled by Giuseppe Camuncoli. It is also worth noting that any stormtroopers or clone troopers who encountered lightsabers had orders to destroy them upon their discovery.

There is also the possibility that Luthen was somehow able to find out that planet Ilum was the source of the kyber crystals that fueled the lightsabers, and that he was able to outmaneuver the Empire by acquiring a few of his own before their occupation of the planet. Then again, he is a spy, so he could have probably ventured to Ilum during the occupation anyway. This might be why he had the kyber crystal he gave to Cassian earlier in the series. The only other group we know of who had lightsabers in their possession were the Inquisitors, and they retrieved theirs from deceased Jedi, or they were former Jedi themselves.

Ultimately, we will either find out if Luthen’s story has been slowly hinting at how he owns a lightsaber, or whether we might just be reading too much into it. Either way, we should find out what happens to him in the last episode of the first season of Andor, which releases on Wednesday on Disney Plus, willing that he makes it to the second season alive, that is.