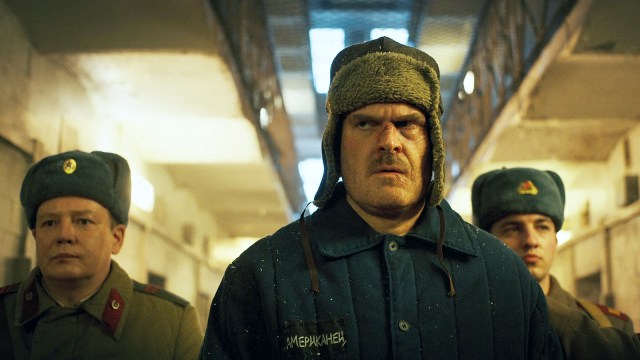 Spoilers ahead for Stranger Things 4 Volume 1

Stranger Things 4 hasn’t been a walk in the park for any of its characters, but one of those who’s had it the hardest this year is Jim Hopper, who’s been locked away in a Russian gulag all season. Things finally started to turn around for him in “Chapter Seven”, though, as he reunited with Joyce (Winona Ryder) and Murray (Brett Gelman) once they came to free him. And yet Hop isn’t out of the woods just yet.

Speaking to IndieWire ahead of volume two landing on Netflix in just a few days, Harbour promised that fans will be “blown away” by what’s about to happen to the former Hawkins sheriff in the final two episodes. Apparently, we’re going to see the character stronger and yet more vulnerable than we’ve ever seen him before. Harbour said:

In terms of Hopper’s arc, you’re gonna see him be more vulnerable and more powerful than you’ve ever seen, and I’m just so excited for you. I can’t talk about it anymore. I need you guys to watch. I think you’re gonna be blown away.

Harbour might be keen not to spill too much in this interview, but he’s actually been a little more forthcoming in previous chats with the press. The Black Widow star has previously assured us that season four would provide answers to some big questions we have about Hop’s past. As we didn’t get these in volume one, we can assume the revelations are about to drop in volume two.

Presumably, Hopper will make it back to Indiana in time for the end of the season, but who knows what will happen since the showrunning Duffer Brothers have indicated that there are shocking deaths to come. Fans would no doubt riot if Jim was killed off, however, so fingers crossed he’ll make it into the fifth and final season alive so “Jopper” can at long last become a thing before the show ends.