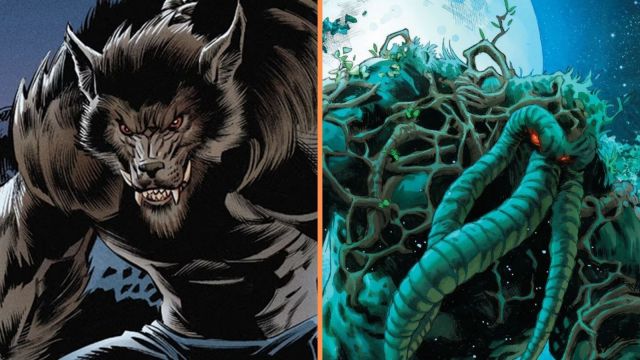 Thanks to the announcement of a new multiverse experience at Avengers Campus, fans now have their first looks at Werewolf by Night and Man-Thing in color.

D23 saw many announcements for the Marvel Cinematic Universe and a trailer released for the previously announced Secret Invasion, but the teaser for Werewolf by Night really captivated fans. Emulating classic Universal horror movies of the early 20th century, the trailer saw a monochrome color scheme. There had been small peaks at a few of the major players, but now we have a solid color version.

The Avengers Campus multiverse expansion had some stunning concept art revealed, including a look at King Thanos. Now, a high-definition version of it is online and features both Werewolf by Night and Man-Thing penciled in color.

The design for Man-Thing in the MCU looks to be a near-perfect adaptation from the comic books, complete with the three face tendrils and red eyes. Werewolf by Night is also looking stellar in his own right, with it another bit of proof Marvel can quickly adapt a character’s comic design and still make it work for live-action.

Man-Thing is a bizarre character in the best possible way and is legitimately one of the more unique characters in Marvel’s canon. Popularized in the 1970s run by Steve Gerber, the character pops up across the multiverse and is believed to be one of the most powerful beings in canon.

Curiously, one of Man-Thing’s most notable partnerships is with Howard the Duck of all people (or ducks). Constantly appearing alongside each other, it’s about time Kevin Feige gave us more duck content.

Werewolf by Night will be available to stream on Oct. 7 from Disney Plus.