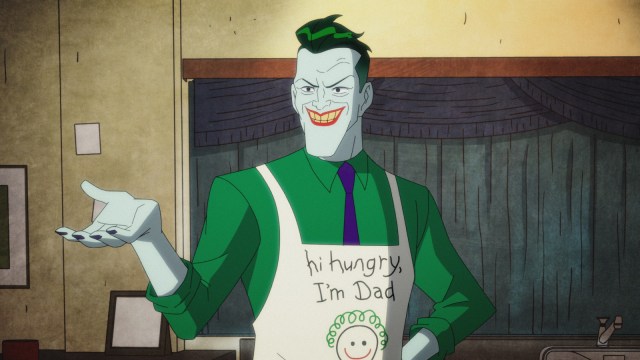 If there were a DC Comics competition for “Character We’re Least Likely to See Get a Kinder, Gentler Makeover,” every hero and villain in the entire eighty-plus year history of the company would probably come in a distant second to Batman’s longtime arch-nemesis, The Joker. But the creators of HBO Max’s Harley Quinn are known for playing the wild cards. And their reimagining of Gotham’s clown prince of crime may be one of the maddest takes yet.

While Harley Quinn may lean into some of the title character’s canon elements, such as her break-up with the Joker, and her romance with her fellow “kind of a villain but actually not so much” partner, Poison Ivy, the series isn’t afraid to explore some more whimsical interpretations of the title character’s friends and foes. Thus we get a sweetheart, cardigan-wearing version of King Shark, a Nightwing with abandonment issues, and a Commissioner Gordon who’s one cotter pin shy of completely unhinged. It’s no wonder producers Justin Halpern, Patrick Schumacker, and Dean Lorey chose a way left (or is it right?) -of-center version of Gotham’s most terrifying criminal.

“We started to feel with the Joker, ‘What can we do that we haven’t seen before with him?’” Halpern told Variety. “He’s such a larger-than-life character, and his dynamic with Harley is so specific, that if we kept him as ‘the Joker who she dumped,’ the character would just constantly want to get his vengeance. So this was a chance for us to go anywhere we want.”

And go they do. But not to the edgiest of edges ever lorded over. Instead, the Quinn-verse version of the Joker has wrestled with some issues, namely being turned”normal” after being soaked in chemicals only to return to criminal insanity later on in season two. And during his time as a regular joe, he met someone, fell in love, became a stepdad, and even took up meditation.

But he leaves all that behind when he becomes The Joker again, right? Turns out not so much. Even though he returns to his life of criminal insanity, this Joker legit fell in love with his straitlaced family life and decided to embrace it as well. According to Halpern:

“In the same way that Harley is in a good relationship now, we thought, ‘What are the effects of a good relationship on the Joker?’ This is a person who has only ever advocated for himself his entire life. He’s the most narcissistic manchild possible, and now there are other human beings that he loves, and wants to advocate for. How does that change, and what does that look like?”

It’s all going to come to a head with today’s episode, wherein The Joker decides to… run for mayor so he can get his kids into a Spanish dual language program at school. Holy Parent Teacher Association, Batman! Who knew the Joker could sink so low?