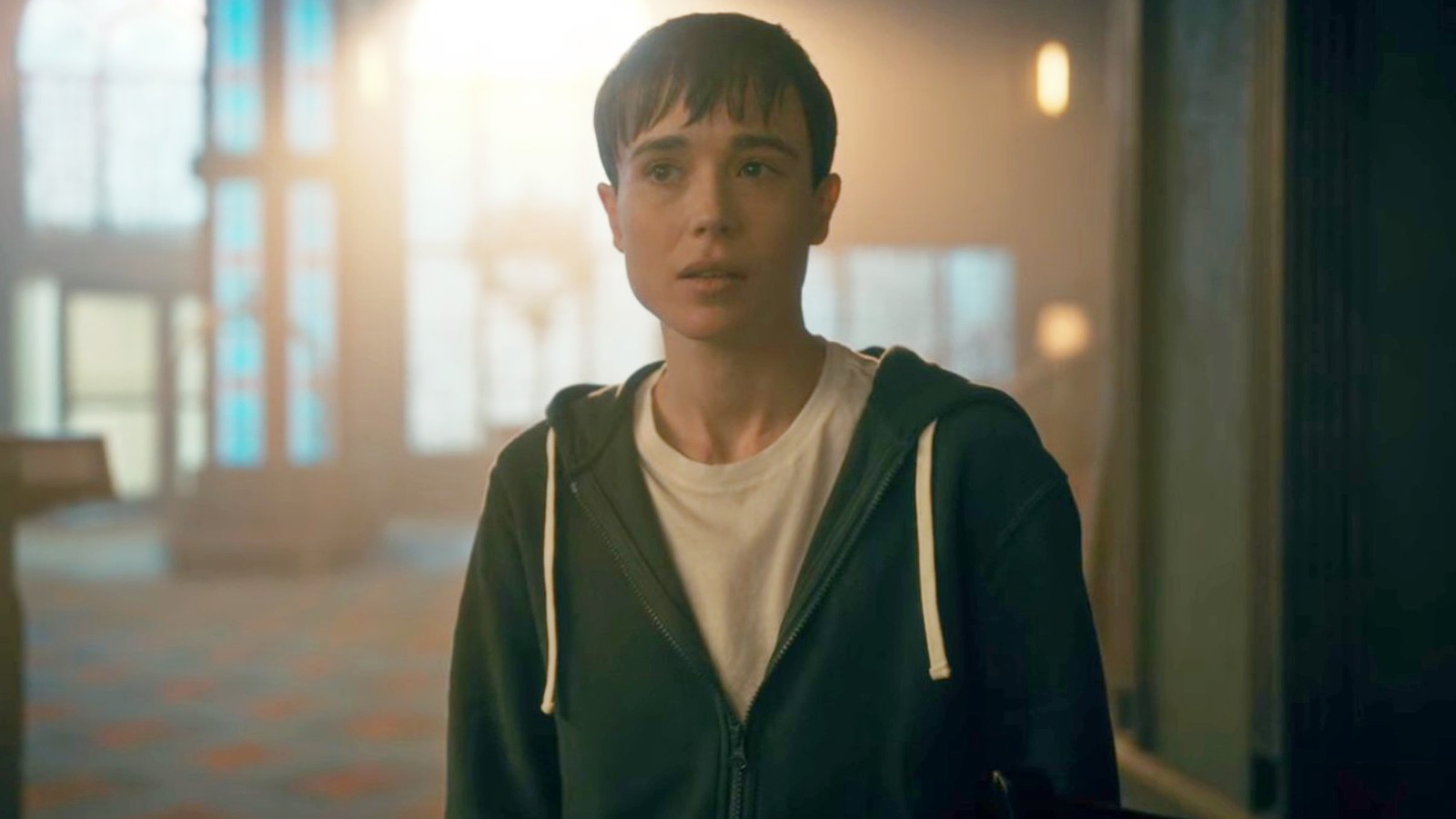 Fans of the popular Netflix series, The Umbrella Academy, have been eager to discover exactly what plans season 3 had up its sleeve to rope in the fact that Elliot Page came out as a trans man in December 2020 into its storyline. Well, we finally have the much-anticipated answer.

Everyone had been thrown for a loop when it was simultaneously confirmed that Page would continue to play Vanya Hargreeves, also known as Number Seven, in the series. The confusion was somewhat allayed when it was announced that Page’s character would now be known as Viktor Hargreeves within the convoluted universe of the show. But that still left the question of how the storyline will bring the actor’s real-life transition to the small screen. Thankfully, not only has the third season seamlessly included it in Page’s character’s ongoing storyline, but it has also handled it with a sensitivity which must have been tricky to nail.

When does Vanya Hargreeves’ transition to Viktor Hargreeves take place in season three?

To start with, the season doesn’t just begin with haphazardly introducing Vanya as Viktor instead and neither does it exaggerate the moment. When the season begins, it takes off where we had last left the Umbrella Academy — facing the Sparrow Academy and realizing that they had messed up the timeline big time. So, for the first episode, Page continues to play Vanya and the rest of the siblings continue to refer to the character as their “sister.”

Beaten by the Sparrow Academy and barely managing to make a harried exit, the six take refuge in Hotel Obisidian to lick their wounds and possibly come up with a line of attack while trying to make sense of how royally they messed up the timeline this time.

The second episode starts with Page’s character trying to piece together the after-effects of their recent adventures to find out how their world-saving antics have been registered in history. He soon discovers that they have been pegged as Communists who planned the assassination of John F. Kennedy.

But what really affects him is the revelation that Sissy Cooper, the woman Vanya fell in love with in the last season, died on October 1, 1989 – the day Vanya was born. He starts reminiscing the time spent with the love of his life and remembers how she thanked him for making her “feel alive” for the first time in her life, thus allowing her to ditch all the societal barriers that had been suffocating her all her life.

Sissy’s words keep resounding in his head as he roams the hotel and as he comes across the in-house salon, he recalls another thing she said:

“You don’t even notice the box that you’re in until someone comes along and lets you out.”

Finally understanding the deeper meaning of her words and fueled with newfound confidence, he finally embraces his identity and enters the salon to get a short haircut, which is followed by him simply re-introducing himself to his family as Viktor Hargreeves when Diego denotes him as “Vanya”.

“It’s, uh, Viktor,” he says. In response, an obviously clueless Diego questions who this Viktor is, so Page’s character replies: “I am. It’s who I’ve always been.”

His declaration is followed by a small pause which prompts him to question whether his identity will be an “issue for anyone”. He is probably remembering all the years his siblings shunned him and never really saw him as a part of their family. But the three brothers are quick to put his doubts to rest when they assure him that they are “cool” with the news and are truly happy for him.

What really prompted Viktor to finally embrace his identity?

When Allison comes to know the same, she also congratulates Viktor while reprimanding herself for not realizing it sooner. Viktor is quick to forgive her and explains how he himself wasn’t completely aware of it himself until he met Sissy.

“Being with Sissy… I don’t know, she… opened something in me. Showed me I’d never be free hiding from who I really am. And after losing her I realized… I just can’t live in that box anymore. I won’t.”

He further adds how he used to hate looking in the mirrors as “everybody felt so strange in their skin.” But not anymore – all he sees now when he looks in a mirror is himself.

Even Luther, who had missed it all as he was enjoying the most lavish kidnapping ever, is elated for Viktor. He even suggests throwing a big party to celebrate the moment but Diego shoots down the idea as they have pretty pressing matters to attend to – like saving the world, AGAIN. It serves to normalize the fact that someone embracing their identity shouldn’t be treated as an unexpected event and should be seen as what it is – nothing out of the ordinary, as in a fair world, everyone has the right to be who they are.

What really stands out about Page’s transition to Viktor Hargreeves is the fact that his arc is not simply reduced to his trans identity and he remains a powerful member of the Umbrella Academy who even the Sparrows are scared of. The fact that the Hargreeves keep their petty sibling rivalries aside to openly embrace him for who he is highlights what is necessary when someone decides to come out to the people that matter to them – unconditional love, support, and understanding.

The others don’t pester Viktor for details or question why he made said decision. As stated earlier, neither Viktor’s arc nor the overarching storyline itself lingers over his choices. The rest of the season is dedicated to the Umbrella Academy racing to deal with yet another world-ending anomaly they inadvertently created and dosing out fires their actions continue to ignite.

All episodes of The Umbrella Academy season three are currently streaming on Netflix.