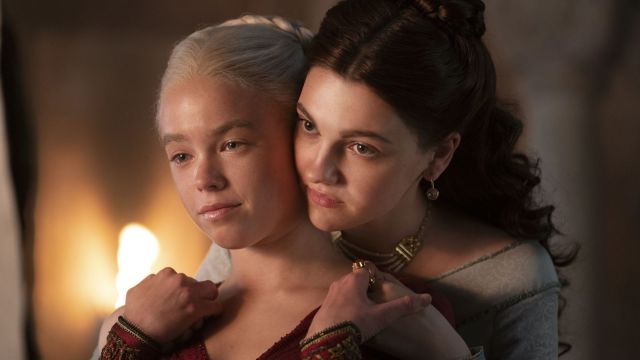 The seven kingdoms are back. HBO’s new series House of the Dragon, a prequel to Game of Thrones, premiered on Sunday, August 21. The premiere was hugely successful, receiving the largest viewership for any new original series in HBO history ever. Deadline is reporting that this means over 20 million viewers have watched the first episode. Because of this, HBO announced earlier than anticipated that the series will be renewed for a second season.

House of the Dragon is based on George R.R. Martin’s novel Fire & Blood and centers around House Targaryen. The time period is set 200 years before the events in Game of Thrones. In the premiere episode, the audience meets a new cast of characters, which includes Rhaenyra Targaryen, whose younger version is played by Milly Alcock, and Alicent Hightower, whose young version is played by Emily Carey.

These young girls are main characters in the new series. Rhaenyra Targaryen is the first-born child of King Viserys I Targaryen. Alicent Hightower is a member of a different family, House Hightower. She is the daughter of Ser Otto Hightower, who is Hand of the King. These characters have a very close and special friendship which may be more than what meets the eye. In a recent interview with Insider, actresses Emily Carey and Milly Alcock explained that they explored the subtext of their characters having romantic feelings for each other while filming the series.

Carey told Insider: “It’s something we brought up with Clare Kilner, one of the directors we also work with for the younger version of the characters. It was something I was immediately conscious of when I read the script as a queer woman myself.” Carey and Alcock believed that the characters might be “in love a little bit.”

Teenage friendships are intense and often confusing. Carey goes on to say: “I think any woman could think back to the best friend that they had at 14 years old, and it’s a relationship and a closeness unlike any other. You do toe the line between platonic and romantic.”

According to Carey, this is intensified because of the highly patriarchal world of Westeros. These young girls are often the sole representative of their gender. They have to stay together because it’s necessary for survival. Carey states: “Especially when it’s put in the context of this world where they are the only two young girls in the Red Keep. It’s 100% something we were conscious of. And so if it reads on screen, it was purposeful.”

Alcock joked: “I’m just actually in love with Emily and so I think that’s it.” She goes on to say that Rhaenyra and Alicent’s relationship helps tell the larger theme of misogyny and homophobia in Westeros. “These women aren’t given the privilege to know what choices they have because of the world that they live in. That’s the theme that runs through this entire story, and Alicent and Rhaenyra’s relationship is a prime example of it.” There are queer characters in the larger world of Westeros but none of them are fully open and accepted. There are no examples of welcome queer relationships for the girls to look up to.

The actresses who play older versions of the characters weigh in

Cooke agreed and stated: “When you have your first intense friendship, you’re throwing all these emotions at the other person and seeing which one sticks. And it’s incredibly complex, but very passionate.”

Viewers will have to wait and see how this relationship unfolds during the series. New episodes of House of the Dragon air on Sundays on HBO at 9 p.m. ET.