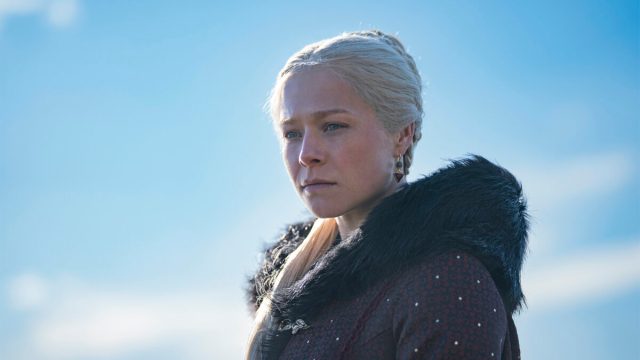 House of the Dragon showrunner Ryan Condal cites the Roman empire as his inspiration. The series takes place two centuries before the War of the Five Kings featured in Game of Thrones and leads to the Targaryen civil war called the Dance of the Dragons. At this time, the dragonriders reigned supreme, but nothing lasts forever.

Condall spoke to Entertainment Weekly about how the new fantasy series will relate to real-world history.

“I wanted to tell a story about the height of Rome before the fall and see the Targaryen dynasty at its very apex so that we can understand the thing that was lost when it all fell apart.”

Calamity unfolds in House of the Dragon when Rhaenyra Targaryen (Emma D’Arcy), daughter of King Viserys (Paddy Considine), has her claim to the throne threatened by Alicent Hightower (Olivia Cooke), who wants her son on the Iron Throne. This is the catalyst for an all-out war in which Targaryens and their allies take up dragons and arms in a series of high-stakes battles to fight for the queen they most believe in.

There’s been more than 70 years of peace under King Viserys’ rule in a time of great decadence and wealth, similar to that of the Roman Empire, which had nearly 1,000 years of domination before it was taken down. Unlike Game of Thrones, in which Daenerys (Emilia Clarke) was one of the last remaining Targaryens, there will be plenty of them in House of the Dragon.

There’s never been a time when so many dragonriders existed in Westeros, but after this time, things end badly for them. The death of Aerys the Mad King brought an official end to their reign during Robert’s Rebellion, and this correlation between these events is why creator George R.R. Martin wanted to do House of the Dragon.

“This particular time period,” said Condal, “was the story that George thought was the thing that had the most direct, if not indirect linkage tonally to that first episode of Game of Thrones.”

House of the Dragon has a lot to prove, due to the incredibly unpopular season eight of Game of Thrones leaving an everlasting bad taste among viewers, but with Martin and Condal at the helm, they’re planning to succeed where the previous series failed.

House of the Dragon premieres on HBO Aug. 21.