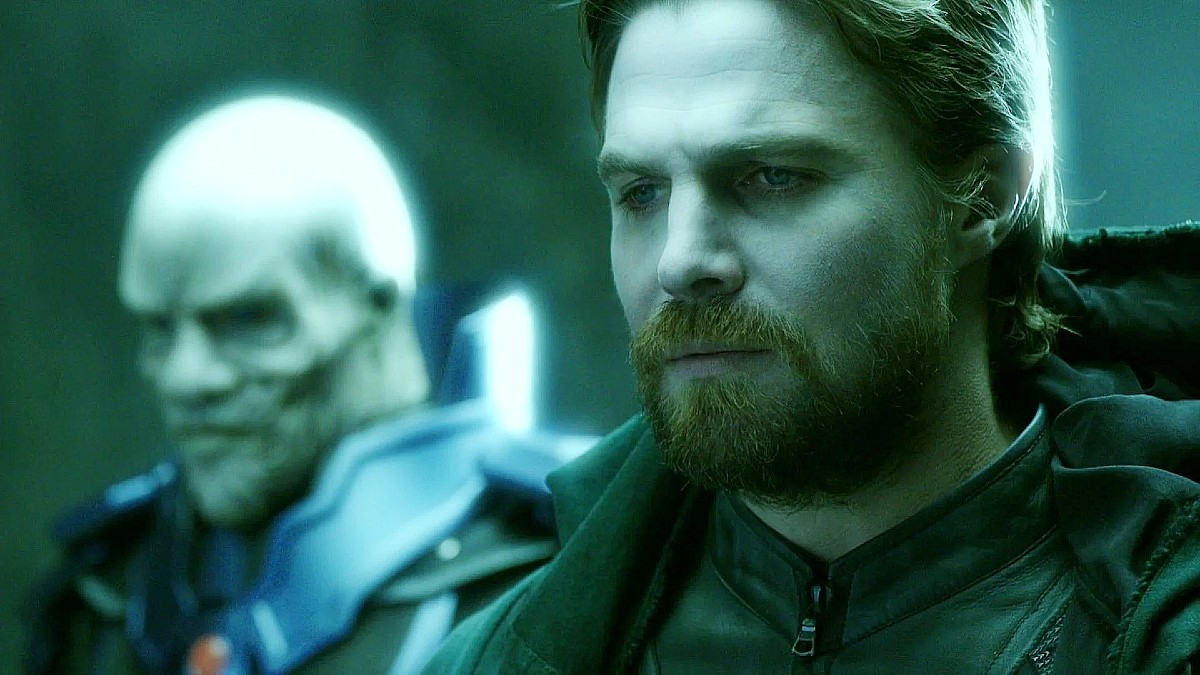 Stephen Amell had the distinguished honor of kicking off the Arroweverse with The CW series Arrow, and his upcoming appearance on The Flash season nine marks his first return since his show ended. But because of what happened when he was last seen, there are some questions in need of answers.

In the last major Arrowverse crossover titled Crisis on Infinite Earths, the Monitor gathered Earth’s greatest heroes to save the universe from the wrath of the Anti-Monitor who sought to destroy reality. Oliver sacrificed his life to save the people of Supergirl’s Earth and became the Spectre, the Spirit of Vengeance, one of the most powerful beings in the DC Universe.

Oliver as the Spectre fought the Anti-Monitor and lit the spark for the other heroes to use the light from the Anti-Monitors’ eyes and return the worlds that the villain had destroyed. Spectre combines his energy with the Book of Destiny, thus creating the new multiverse and Earth-Prime, which is where the Arrowverse heroes exist. But Oliver doesn’t return with them. He died a hero’s death.

But recently surfaced on-set images from The Flash, which is ending in its ninth season, have captured Oliver Queen in his Green Arrow uniform for episode nine. Diggle, Green Arrow’s teammate in his series, is also in the episode as Spartan. He had been chosen to wield the Green Lantern ring, but Diggle turned it down.

How is Oliver Queen back from the dead?

It’s possible that Oliver Queen union with the Spectre has given him a chance to cheat death. Spectre’s powers are nearly limitless and death isn’t a problem for him. He’s got godly abilities, and control over space, time, energy, and matter. He’s invulnerable and has super-strength, so it’s quite feasible for the being to decide that Oliver is worthy to come back because of his final selfless act.

Another option is more of a technicality. Though Oliver existed on Earth-Prime, it’s unclear if they ever recovered a body. It’s possible that he’s not actually dead, but is on another one of the many parallel Earths that were created in Crisis on Infinite Earths. This could’ve also been thanks to the Spectre who wanted to preserve Oliver’s life.

Last, Oliver could’ve still been the Spectre. His tenure as the Spirit of Vengeance was dramatic, but it was also short-lived. Spectre could’ve manipulated reality to make it seem like he died, giving his friends some closure, all the while he remained committed to his heavenly duty. Any of these scenarios would work pretty well depending on where the story goes.

Whatever the case may be, the situation is dire enough to call for his return to the Arrowverse. Reportedly, Amell was heard screaming his famous line from Arrow, “You have failed this city!” at the villain Bloodwork. Bloodwork is a Flash villain who feeds off of blood and seeks immortality but hasn’t been active since season six. Evidently, he, like Oliver Queen, is back again for more.