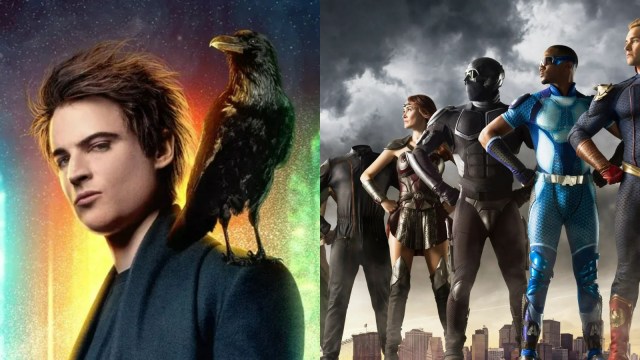 After 33 years of existing in the comic book world, The Sandman was finally brought to screens this August thanks to Netflix’s smash-hit adaptation of the seminal DC/Vertigo series. Although it took more than three whole decades for Dream of the Endless and his surrounding mythos to be translated into live-action, it wasn’t for lack of trying as various Sandman projects have been touted over the years, from movies to other TV shows.

Creator Neil Gaiman has admitted to hating a proposed movie so much that he deliberately leaked the prospective script online in a successful attempt to get it canned. However, Gaiman isn’t so dismissive of all the near-miss Sandman adaptations. For instance, he was supportive of the movie Joseph Gordon-Levitt was working on in the late 2010s. Another one that Gaiman liked that makes for a fascinating “what if?” for fans was a network TV project headed by Supernatural and The Boys executive producer and showrunner, Eric Kripke.

Hold up, we almost got a Sandman show from the showrunner of The Boys?

It’s true. Before the Netflix series, which is spearheaded by David S. Goyer, Allan Heinberg, and Gaiman himself, got rolling, Warner Bros. Television was keen to take a traditional network TV route with the intellectual property, with Kripke attached to bring it to life. The project was announced back in 2014 before it quietly dissolved behind the scenes. It’s unclear exactly what happened, but reports say Gaiman himself nixed the project as he felt it wasn’t the best way to tackle the property.

Gaiman just reminded us about this intriguing unmade series on Twitter. In response to a fan inquiring about Kripke’s take on Sandman, the writer/producer explained: “It was a terrific network TV version of Sandman. But when you make a network TV version of Sandman you lose an awful lost of what makes it Sandman. [Eric Kripke] did a great job considering the limitations.”

Kripke himself then chimed in with his two cents, thanking Gaiman for his support and admitting that he “tried” hard to make the project work, but these days, he’s glad the Netflix version is the one that made it to screen.

“Kind of you, sir,” Kripke wrote. “WB gave me a crack at [The Sandman] but said it had to be network. It was my fave comic, inspired much of [Supernatural] so I tried. Neil was kind and patient but ultimately, it would’ve been a bad show. I’m glad he held out. Sandman on Netflix is lush, stunning. GO WATCH!”

Supernatural fans won’t be surprised that Kripke is a massive Sandman fan as that iconic CW series already tipped its hat to Gaiman’s work in many ways. Crowley the demon, for example, is named after the character with the same name from Good Omens. His take on the material would no doubt have been as reverential as possible, albeit while jumping through hoops to please network execs.

While the project never got far enough along to be attached to a specific network, it seems likely that Kripke’s The Sandman could’ve ended up on The CW, much like SPN. Given that the Arrowverse was just becoming a sprawling, interconnected universe in 2014, it’s not hard to imagine that the series could’ve even been connected to the likes of Arrow and The Flash.

As for its approach and storyline, Gaiman has revealed this elsewhere. While speaking to IGN, he teased that Kripke’s version would’ve essentially been “the Rose Walker show.” In other words, to make it more accessible, the focus would’ve been switched from Morpheus himself to Rose, aka the Dream Vortex, the everywoman character who gets caught up in Dream’s world.

That would’ve been a solid angle to take, with much of the second-half of Netflix’s Sandman season one even using Rose as a surrogate audience. Perhaps Rose would’ve been reimagined as some kind of hunter of rogue nightmares and dreams that escaped from the Dreaming, thereby giving the show an episodic structure like SPN. Would we have watched that? Hell, yeah. Would it have been as fulfilling and faithful an adaptation of The Sandman universe as the Netflix show? Not in your dreams.

The Sandman is available to stream on Netflix.