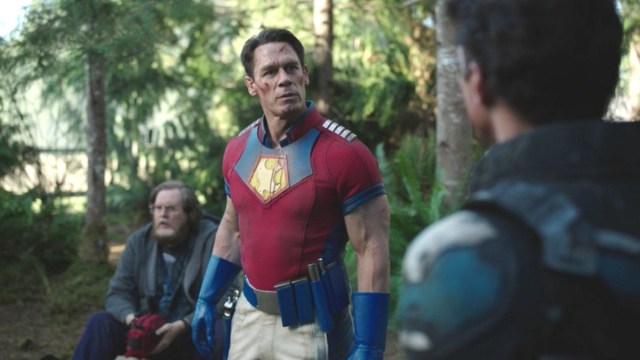 Even though it was definitely John Cena’s show, Peacemaker season 1 was filled with breakout supporting characters, from Danielle Brooks’ Adebayo to Jennifer Holland’s Harcourt. The biggest fan-favorite to emerge from the series, however, may be Adrian Chase aka Vigilante (Freddie Stroma), the dorky yet surprisingly lethal costumed crime-fighter/criminal. But fans have had a burning question about the character since the series aired, one that creator James Gunn has now helpfully answered.

When outside of his Vigilante suit, Adrian is never seen without his glasses, but if he really needs them, then how does he get around in his superhero outfit? The writer/director was asked to fill in this plot hole on Twitter, with Gunn explaining Vigilante’s secret: his red visor was made especially for him and has his prescription.

This is inadvertently hilarious as it means there must be one more person out there who knows Adrian is really Vigilante: his optometrist. Chase is extremely keen to keep his secret identity under wraps in the series, so it’s ironic that he went and got a specially designed visor that would’ve made it pretty obvious that he’s the masked guy with a red visor running around the neighborhood.

For those missing Peacemaker since it concluded its debut run this February (yes, the show did air this year — I know, 2022, right?), rest assured that Christopher Smith and his ramshackle bunch of rogues will be back for a second season. Exactly when, we don’t know, but presumably Gunn will get to work on it once he’s brought Guardians of the Galaxy Vol. 3 to theaters for Marvel next May. For the moment, you can watch the first eight episodes on HBO Max.