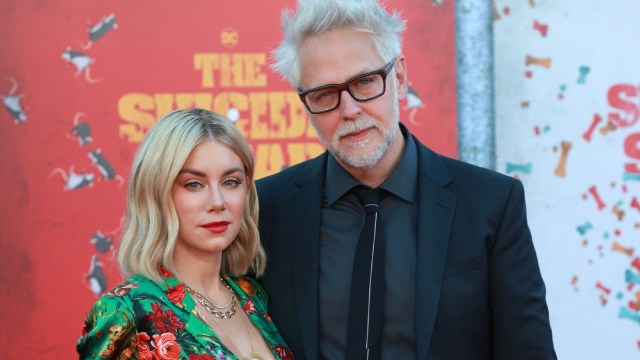 James Gunn and Jennifer Holland have tied the knot, with the Guardians of the Galaxy writer-director Gunn sharing photos from the ceremony on social media.

Holland, who stars in Gunn’s Peacemaker for HBO Max, appeared elated in a white gown against a mountainous backdrop with a lake as Gunn, sporting a green suit, looks similarly overjoyed.

“This weekend I was lucky enough to marry my best friend & the love of my life, @jennlholland. ❤️” Gunn wrote on Twitter.

“Husband!! I love you ❤️ @JamesGunn” Holland wrote while sharing the post.

The ceremony held in Aspen Colorado was briefly interrupted by a moose at one point, Gunn shared in a video.

Sean Gunn, the director’s brother and an actor who frequently appears in his movies, officiated the ceremony.

And the wedding cake itself featured Funko Pop figurines in the likeness of Gunn and Holland.

Gunn also shared that many castmembers from Guardians of the Galaxy and his DC film The Suicide Squad, as well as the aforementioned Peacemaker, were present during the ceremony, including Chris Pratt, Zoe Saldaña, Karen Gillan, John Cena, and Nathan Fillion.

Gunn’s next film will be Marvel’s Guardians of the Galaxy Vol. 3, which is expected to be released on May 5, 2023. A sophomore season of the Holland-starring Peacemaker is also expected to come out at some point in the future for HBO Max, though it is unknown at what stage of development it is in.