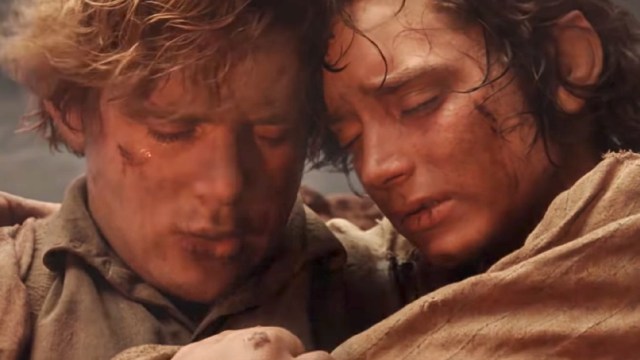 The Lord of the Rings: The Return of the King

Fresh conversations surrounding the massive fantasy property crop up nearly daily, as new fans join veterans in celebrating the many triumphs of J.R.R. Tolkien’s incredible works. The latest conversation to dive into Middle-earth takes aim at the topic of heroism, and finally gives Frodo the respect he deserves.

Not all fantasy properties have what it takes to rival franchises like Lord of the Rings, unfortunately, and streaming services remain cautious when it comes to fresh fantasy endeavors. Fans of the genre were disappointed to recently learn that yet another fresh favorite is destined for a premature cancelation, following closely on the heels of Fate: The Winx Saga. Thankfully, the creator behind the latter program already has his sights set on what comes next.

A conversation about heroism dissects the Sam vs Frodo debate

An unceasing debate surrounding the “true” hero of The Lord of the Rings constantly pits Frodo and Sam against one another, and a new conversation is finally putting the ridiculous discussion to rest. While Sam is certainly, inarguably, one of the most vital heroes of the franchise, Frodo also deserves respect for the nearly-impossible mission he was tasked with. There is no singular hero in the Lord of the Rings world, and trying to insist that Sam exists as the sole genuine champion only serves to expose the exhaustingly commonplace dudebros among the popular fandom.

The Imperfects is the latest fantasy favorite to get the ax

Hot on the tail of Fate: The Winx Saga‘s cancelation, another fantasy endeavor’s wings are being clipped before it has the chance to fly. The Imperfects will not see a second season, leaving fans of the series to rage online. Quite a few people are vocally complaining about Netflix’s tendency to cut show’s short, forcing people to get invested in a solid new program only to have it prematurely canceled.

The creator of another ill-fated fantasy series is bouncing back

Less than two weeks following news of Fate: The Winx Saga‘s cancelation, series creator Iginio Straffi is already pivoting to a new project. This time, he’s bent on pouring his talent into a feature film adaptation of the popular story. The project reportedly has a proposed budget of $100 million and will transform the kid-friendly story about fantasy and friendship into a blockbuster film that could rival Harry Potter.