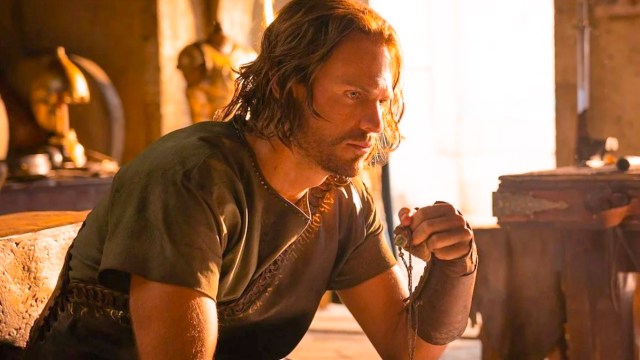 A languorous approach to storytelling is giving Amazon Prime’s The Lord of the Rings: The Rings of Power plenty of space to breed theories. The show is a constant target of fresh fan theories and wild claims, as viewers strive to determine the hidden identity of several key figures. Halbrand has been a heavily debated addition to the story, as fans propose a wide range of potential identities for Galadriel’s human companion. The latest departs from the popular Sauron theories to instead propose a heart-wrenching alternative.

Halbrand is far from the only character to prompt debate, of course. Fans are taking aim at many of the show’s mysterious characters, and linking the smallest details back to lore as proof that their theory reigns supreme. There are plenty of details to choose from, after all, from nods to costumes and design to familiar filming styles and easy-to-miss Easter eggs.

Halbrand has been the subject of pretty much every Rings theory out there, with a number of fans determined to see him reveal himself as Sauron, or the King Under the Mountain, or any number of known Tolkien characters. A new theory proposes something new, and fans are stressed about its potential implications. Halbrand’s presence as a king among men poises him to potentially acquire one of the nine rings, transforming him into a Nazgul and securing him as a perpetual servant to Sauron.

Could the Stranger be one of the Istari?

The Stranger’s true identity has been hotly debated since he first appeared in Rings of Power, but recent developments are departing from earlier theories to propose an entirely new potential. Fans are beginning to suspect that Nori’s new friend is one of the Istari, and a very familiar face to Lord of the Rings fans. Given the show’s already-established departure from many of the specifics of Tolkien’s timeline, it’s not unreasonable to connect the befuddled Stranger back to everyone’s favorite wizard.

Fans delight in the similarities between Rings and its predecessors

Viewers with less of an eye on the many swirling theories are instead investing their time in appreciating Rings’ many similarities to the films that came before it. A scene from one of the show’s early episodes is inspiring comparisons to an early Lord of the Rings scene, as fans note the many stylistic nods to the early 2000s trilogy. The carefully crafted aesthetics of the Harfoots are a delightful retroactive reference to their Hobbit descendants, and fans find them utterly charming.