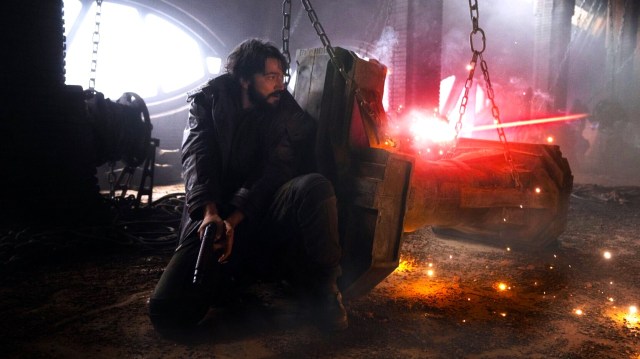 Only a few weeks ago, fans were still treating Andor with intense skepticism. After all, Rogue One is now six years old and we’d already seen the bombastic ending of Cassian Andor’s journey. Now we’re five episodes in, and most Star Wars fans have switched gears to treating it like it’s the second coming.

While Disney and Lucasfilm must be pleased with that perception, the flipside is that it’s making other Disney Plus live-action Star Wars look bad. It’s set an incredibly high bar that Ahsoka, Skeleton Crew, and The Acolyte will struggle to surpass, and even with the praise, this slow-burn character-focused show isn’t pleasing viewers craving hot Jedi action.

The Star Wars fandom is rarely in agreement about anything, save perhaps that the original trilogy is incredible and that The Mandalorian is a great show. We may soon be able to add Andor to that list, as one fan who stuck their head over the parapet and accused the show of being boring and that “absolutely nothing has happened” over five episodes just got obliterated in the replies.

Fans dubbed this “the worst take I’ve ever seen about Star Wars”, said that it’s “fundamentally stupid”, and recommended settling for shows that feature “more explosions”. We can see their point as, after years of getting fairly shallow Star Wars stories that aim for the level of a Young Adult novel, it’s novel that Andor goes a little deeper and takes its time building characters.

Even so, no show is beyond criticism. Sooner or later Andor will have some kind of wobble and opinion may rapidly change. But, right now, don’t expect a warm reception from fans if you lob hatred at the show.

Should Andor be the blueprint for all future Star Wars shows?

The warm reception has also had some fans arguing that anyone working on upcoming Star Wars Disney Plus shows should use Andor as a model for success. In some ways it’s difficult to argue, especially in the way the show uses practical sets over The Volume, boasts better dialogue than anything since The Empire Strikes Back, and appears to have taken the time to properly think through its premise and find something new to say.

That said, one of the reasons we’re enjoying Andor is because it’s so different, so we wouldn’t want all of Star Wars to be like this. The galaxy is big enough for goofy swashbuckling adventures, mystically focused stories about the Force, and occasionally outright comedy.

Even so, somebody should be taking notes, as it’s sad thinking about what The Book of Boba Fett or Obi-Wan Kenobi could have been if Lucasfilm had approached them in the same way they did Andor.

Disney Plus’ Star Wars output is currently equally split between classic characters Obi-Wan Kenobi and Boba Fett and newer ones Cassian Andor and Din Djarin. Is it possible to decide which of them is objectively the best? Fans have been trying their best to decide, but it seems that they all have their positives and negatives.

That said, Temuera Morrison’s Boba Fett is proving rather unpopular, likely because his solo show portrayed him as a bumbling and ineffective crimelord. Conversely (and predictably given the rest of this roundup) Cassian Andor is getting a lot of love. Obi-Wan is also a popular pick, primarily because of the four he has the longest arc in Star Wars, stretching from The Phantom Menace right through to his time as a Force Ghost in Return of the Jedi. And, of course, you’d be a fool to count out Din Djarin. Decisions decisions…

It’s the New York Comic-Con this weekend, though Star Wars news is likely to be thin on the ground. Perhaps we can hope for some fun announcements for new comic books and novels coming up over the next year, though with the big screen Star Wars projects in limbo and future Disney Plus shows all unveiled I’d keep your hopes low.

Even so, as always, fingers crossed.