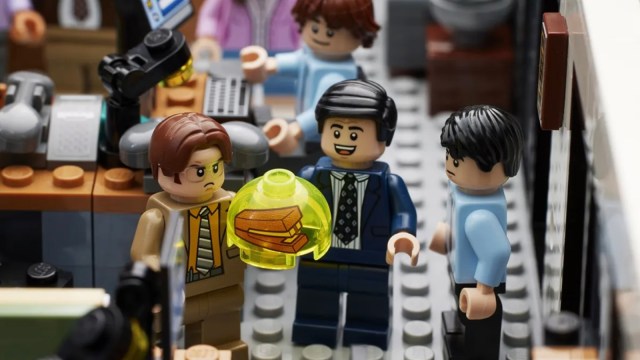 Lego has finally heeded the words of the great Michael Scott quoting the equally great Wayne Gretsky, “You miss 100% of the shots you don’t take.” And so they’re releasing a toy replica of the set of The Office, including Pam’s reception desk, Jim and Dwight’s sales desks, Michael’s office, and the conference room.

Soon kids of all ages will the chance to come home from a hard day at work or school and relax in the fantasy of having a soul-crushing job from which there is no escape. Who hasn’t wanted to be like Jim and smirk slightly at a camera every time someone in the house says something dumb or inane (camera not included)?

The set will also include figurine characters from the show with their own accessories, including Angela with a cat and Michael with a “World’s Greatest Boss” mug that he bought himself. There will also be a replica of Kevin’s pot of chili and a stapler in a bowl of Jell-O.

The set is a part of the Lego Ideas line that allows Lego users to submit their own ideas. In this case, a fan named Jaijai Lewis spent years submitting three different ideas based on the show before he hit on a full proposal that received over 10,000 votes from fellow Lego users and passed Lego’s full board review process.

Lego’s The Office set follows several other kits based on iconic sitcom locations, including the “Central Perk” coffee shop from Friends and Jerry’s apartment from Seinfeld.

Lego The Office is available for preorder now through their website.