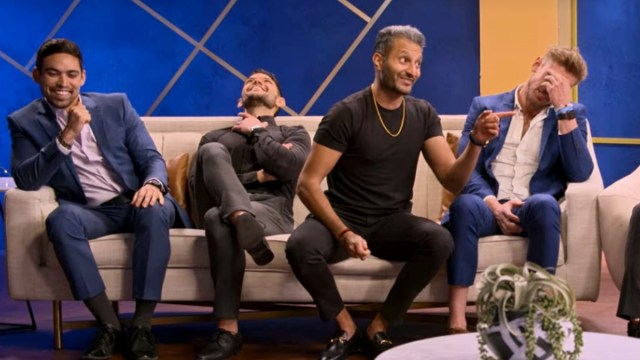 The breakout star, if you can call him that, of Love is Blind season 2 was undoubtedly Abhishek “Shake” Chatterjee. But fans looking for Shake to, well, shake up the upcoming “After The Altar” companion piece shouldn’t hold their breath — as the 33-year-old veterinarian is making his feelings pretty clear on where he stands on the Netflix reality dating series.

Throughout the process, Shake was clearly there for the wrong reasons, as his superficial nature contradicted with the entire point of the reality series, which was to fall in love without someone before laying eyes on them. And yet, eventually Shake proposed to Deepti Vempati, a gorgeous Indian woman, before leaving the pods, only to tell anyone who would listen that he wasn’t attracted to her.

Things really came to a head in the reunion episode, after the cast and hosts Nick and Vanessa Lachey had watched the series and everyone had seen how Shake conducted himself. But sadly, we’ll be robbed of those fireworks in “After the Altar.”

“Honestly, they begged me to be on it,” Chatterjee told TMZ in a video posted Friday morning. “They wanted me to speak with Deepti one on one — they wanted to see some kind of reconciliation, but after how they portrayed me. And then especially after how the hosts of the show were supposed to be impartial came after me?”

“I want nothing to do with them, you know?” he explained. “For all I know, I’m gonna go in there and say my piece in earnest and then, you know, Deepti gets up and like storms out or something. I don’t know what they could pull, but I just didn’t trust them.”

For reference, the Lacheys did indeed come at Shake, but it was only after he slammed the experiment and basically said that “a big weight discrepancy” would have been a dealbreaker for him. Additionally, he remarked that Mrs. Lachey was the only woman in the room he was attracted to, after she had just spent five minutes berating him.

“I don’t think this is the way to find love, I think this is a failed experiment,” Shake continued, which … maybe it is and maybe it isn’t. “I think most intelligent people at home understand that, you know, there’s a reason it doesn’t work this way. And the way the hosts came at me for suggesting that, perhaps, love isn’t blind … suggests that they’re pretty biased about how the narrative of the show is supposed to be.”

Chatterjee added that he doesn’t really see Love is Blind, which has been picked up through season five, “as a sustainable franchise,” and that “the exploitative nature of it is gonna eventually reveal itself, and for the most part it kinda has.”

Well, obviously — that’s what makes it so damn entertaining. An unfortunately Shakeless “After the Altar” will be released on Netflix on Sept. 16.