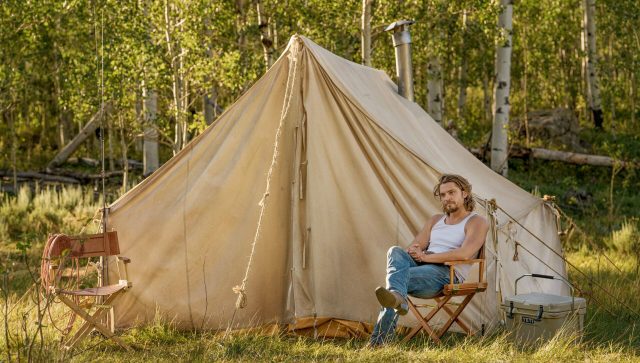 Luke Grimes is getting deeply personal and sharing exciting ideas with fans ahead of the season five premiere of Paramount’s number one series, Yellowstone.

From holiday traditions with his wife to embracing becoming the face of the new Stetson campaign, Grimes has a lot going on right now — and that’s without mentioning his blooming country music career. Of course, he’s also got Kayce Dutton on the brain, don’t we all, and he’s looking towards the future of Yellowstone with a long lens.

So what would that look like for Dutton if it were up to Grimes? Well, fans will be happy to hear that he’s as invested as we all are in the continuing story of the Dutton family.

Speaking to Cowboys and Indians, he shared that he would be on board with the overwhelming hope in the hearts of fans everywhere: that Kayce Dutton would be around for a long time.

“I probably would do it forever. I know that’s unrealistic, but I enjoy the world — not because it’s easy or anything. It’s an intense job like I said. You have a little internal battle when you play a character like this, but it’s also like a drug at this point. I love playing Kayce Dutton.”

Unrealistic or not, fans would love to see Grimes breathe life into Kayce forever. Something is intoxicating about the Yellowstone realm, so his feelings for Kayce make sense, for the adoration fans feel for it – the cast has to experience an addicting drive to create the stories they craft.

You can catch up on Yellowstone with all four seasons streaming now on Peacock, and don’t forget to cancel all your plans on Nov. 13 for the two-hour television event.