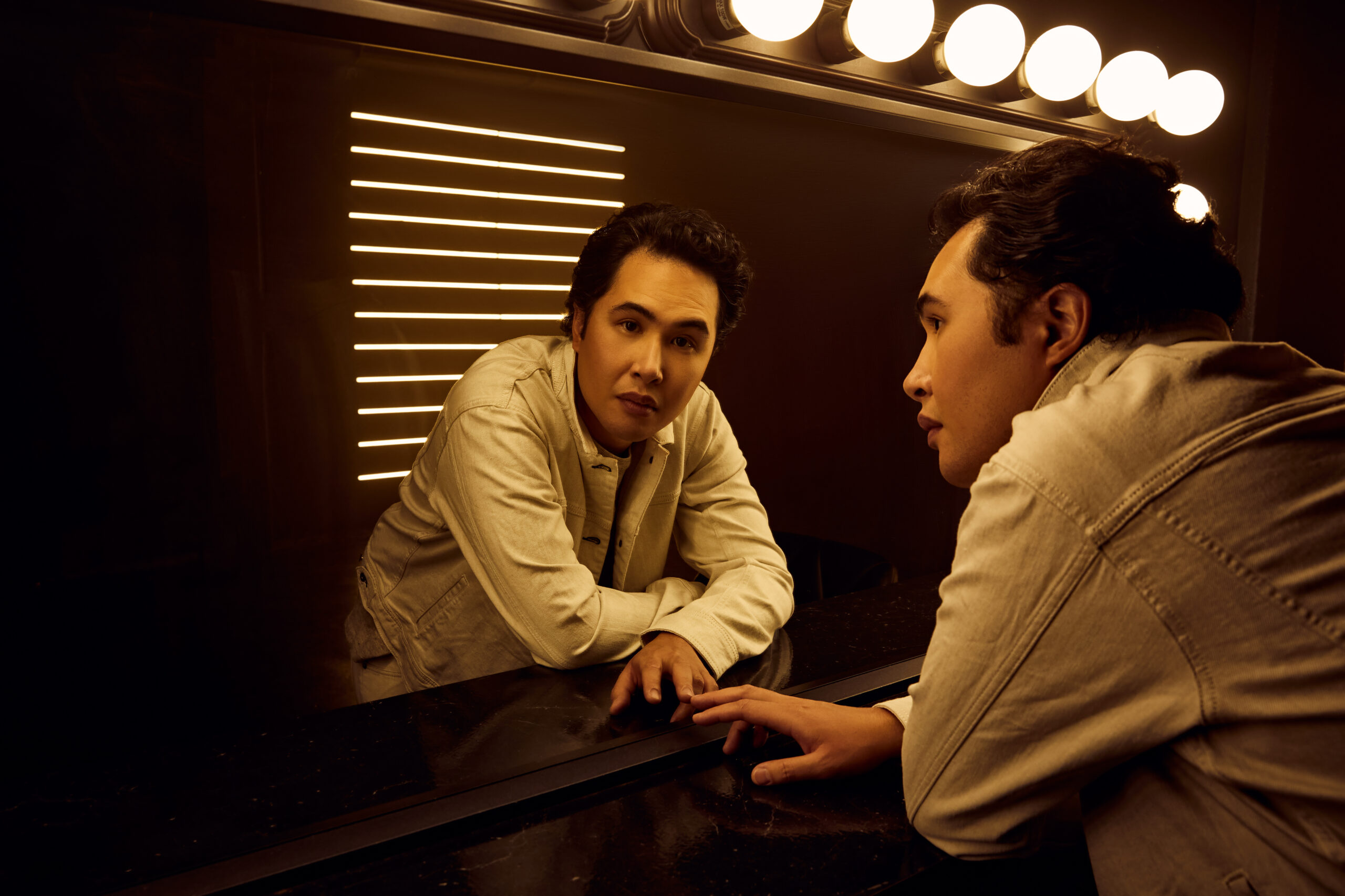 If you’ve seen the NBC hit series Mr. Mayor or the Netflix smash Orange Is the New Black — you’ve seen the acting talents of Mike Cabellon. To the benefit of his teammates and viewers who watch his projects, Cabellon brings a sense of humor, pride, and honor to his roles and work.

Cabellon’s most recent project is Mr. Mayor, and he calls the experience an easy yes; being cast among some of the greats in comedy for a series that surprises viewers every week is a treat. While you might imagine the show is political in nature — it is called Mr. Mayor, after all — the heart of the show is rooted in relationships, humor, and the beauty behind optimism as a driving force.

Of course, for Cabellon, the brains behind the operation and the cast that makes it happen were part of that “easy yes,” and it’s a yes fans are grateful for. Cabellon plays Tommy Tomas in the series, a character as intriguing as he is smart and — throughout season two — taking opportunities to grow and become a team player.

We got the chance to speak with Cabellon about Mr. Mayor, the drive to make acting his career, and how the power of empathy is what we all need most right now.

WGTC: When did you know you wanted to make a career out of acting?
Cabellon: “It’s hard to pinpoint an exact moment. Growing up in Las Vegas, I think I knew from an early age that I wanted to work in entertainment, but I wasn’t sure which side of the camera I wanted to be on. I dabbled in a little bit of everything – editing, writing, acting, etc. – and I think I’m honestly still of that mindset. Like, acting is the most fun to me, but I just love making things and telling stories any way I can. That being said, after college, I moved to New York and tried having a ‘real’ career in advertising while doing comedy on nights and weekends, and I was miserable. I did that for about three years before deciding I’d rather be happy than rich. I feel extremely lucky that things have worked out so far.”

What initially drew you to NBC’s Mr. Mayor?
Cabellon: “It was definitely the opportunity to work with this group of people. I mean, the cover page of the pilot script says ‘written by Robert Carlock & Tina Fey,’ and that was already enough for me to be like, ‘Yes. Whatever it is, yes. I’ll play anything.’ I’m such a huge 30 Rock fan. And then, at that point, they had already cast Ted & Bobby, so my second thought was, ‘Double yes. I am 100% in. Say no more. I would love to be able to play with those two.’ Everything else that followed – the rest of the actors getting cast, the fact that the Tommy character is fun to play – it’s all icing on the cake.”

You play Tommy Tomas in the series; what about his character resonates with you the most?
Cabellon: “I think Tommy and myself are both very driven people. I think we both have that sense of being self-made — like we clawed our way up from nothing to get to these arenas that we’ve had our sights set on since we were kids – politics for him and entertainment for me. So that’s a positive. On the other hand, I think we can also both be a bit pretentious. Tommy thinks he’s smarter than everyone else in the room, and I think I felt like that when I was younger. I’d like to think I’ve learned to be more humble as I’ve gotten older, but a younger version of me could definitely relate to that.”

What would you choose if you could describe Mr. Mayor to new viewers in only three words?
Cabellon: “It’s not political!”

For those unfamiliar with the series, Mr. Mayor follows the story of retired businessman Neil Bremer, played by Ted Danson, who runs for Mayor and surprisingly wins the election. From there, he works to make positive changes in his community and for those he loves. Tina Fey and Robert Carlock wrote the series, which also stars Holly Hunter, Kyla Kennedy, Vella Lovell, and Bobby Moynihan. It’s an absolute comedic goldmine with some heartfelt moments, too.

Of course, Cabellon has passions outside the acting realm, one of which is Story Pirates.

As a mother to a creative kid myself, I’ve got to say that Story Pirates is such a fantastic venture. What about Story Pirates made you want to jump into the program?
Cabellon: “I’m so glad your family enjoys it! There are just so many funny and talented people who are currently and have in the past been associated with Story Pirates. In the New York comedy scene, it’s sort of its own offshoot. UCB over here, stand-up comedy over here, and then way back in the corner is Story Pirates. Like, performing for kids isn’t everyone’s idea of a good time, but if you’re even remotely interested in being silly on stage, it attracts a certain type of performer. So it just felt like a fun group of people to be a part of, and all for a good cause, so there was no reason for me not to join. I spent seven years doing comedy in New York, and it just felt like I was working a different muscle than I was when I was doing ‘adult’ comedy. And once I joined, I just never looked back.”

How can fans find out more about Story Pirates?
Cabellon: “I’d recommend the Story Pirates podcast if you haven’t already, and if you wanna dive in further to albums and books and live shows, go to storypirates.com!”

You made a passionate plea on social media to stop Asian hate and even offered to purchase an Asian-led film for any fan who couldn’t afford to do it themselves. You mentioned empathy being a critical tool in the fight — is continuing to show and advocate for empathy an important part of your career, and how do you plan to continue it?
Cabellon: “Can you imagine if I said ‘no’? Of course, it is! Look, I’m not naive; I know that empathy is not going to solve all the world’s problems today. But it’s, like you said, a tool in the fight. There are other tools we can use to solve today’s problems. But teaching the next generation empathy will help stymie tomorrow’s problems. That’s why I’m so invested in Story Pirates and arts education – teaching kids to develop empathy and develop their own voices now will really help the world later on down the line. And it’s not just kids – if we can normalize characters in movies and TV shows that aren’t just CisHet white men, then we can start to chip away at the preconceived notions that people who might be bigots, whether intentionally or not, have in their heart. So the more I can do with myself in front of a camera, the more people who look like me that I can put in front of a camera, the bigger and faster the change.”

You get to work closely with Ted Danson in Mr. Mayor what is it like forming a working and personal relationship with him?
Cabellon: “If I take a step back and think about it, it’s surreal. I mean, he’s a living legend! But day to day, moment to moment, it just feels easy. Ted (and everyone else on the cast, for that matter) has absolutely zero pretension about himself. He’s as humble as they come. He makes it easy to be his friend. So I try not to think about his ‘status’ too much.”

You’ve said Tommy grows into more of a team player in season 2; what sparks that change (if you can share that without spoiling anything), and how was it fun to explore more of Tommy’s character arc?
Cabellon: “I think there are a few factors that go into that. As you saw in the first episode, there are new people in the office, and I think Tommy feels threatened by that, so he goes back to the teammates he already knows and trusts and doubles down on those relationships. I think there’s also the fact that in the first season, Tommy, Neil, and Mikaela were all brand new to the job. Tommy has his defenses up in season 1. But now that they’ve all been working together for a year, his defenses are down, and he’s more willing to play along with everyone else. So that’s been fun to play as an actor – being less antagonistic with everyone else in the office and getting to be a lot nicer to my castmates.”

Is there another genre of acting you’re interested in exploring?
Cabellon: “I’d love to do an action movie. Action was my first love as a kid; I think it’s most kids’ first love because you don’t need language or context to understand that a guy driving a car through the air looks really cool. And I think a lot of the characters I play are sort of stand-and-talk characters, and I’ve relished every opportunity I’ve had this season to do physical comedy bits because it’s such a nice change of pace to be able to communicate using more of my body. And I know ‘movies’ is sort of a non-answer since that’s not strictly a genre, but acting for film and acting for television are different beasts, and I’d love to tackle that challenge.”

As a writer, what projects do you hope to bring to audiences that will inspire them?
Cabellon: “My sort of mission statement as a writer is to tell Asian American stories through a genre lens. I think that just in the last few weeks, we’ve seen beautiful examples of this with Turning Red and Everything Everywhere All At Once, and After Yang. I think I want to push that even further and tell stories that a non-Asian writer couldn’t possibly write, but in a package that’s more fun than a dour drama (although those films also have their place! No shade!).”

Last but not least, if you could give your younger self any advice — what would it be?
Cabellon: “When I was a kid, I remember my mom telling me she wasn’t going to bother teaching me Tagalog since I spoke English at school and she spoke English at work. And of course, as a kid, you’re like, ‘Less stuff to learn? Fine by me!’ But now, as an adult, I wish I was bilingual. I wish I had that skill. I’ve taken a Tagalog class, but it just doesn’t stick the way it does when you’re a kid. So if I could go back early enough, I’d tell my younger self to just suck it up and learn another language.”

Being wowed by Cabellon’s talent is one thing, but his personality and the things that motivate him are more reasons to become a fan of the rising star. You can catch Cabellon on NBC’s Mr. Mayor, airing new episodes Tuesday evenings.