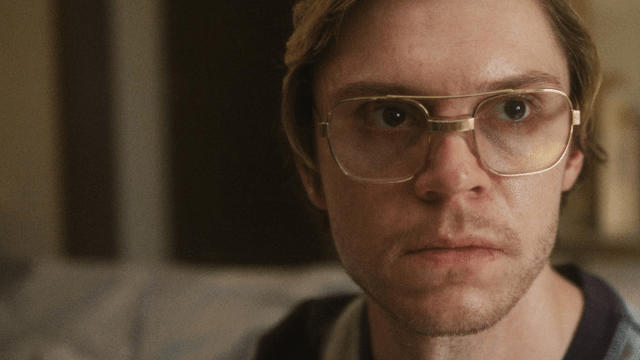 The resurgence of true crime media in the influential mainstream has seen the sub-genre skyrocket in popularity, especially with Netflix’s ongoing Conversations With a Killer saga created by Joe Berlinger, which currently consists of The Ted Bundy Tapes and The John Wayne Gacy Tapes. Anyone staying up-to-date on the latest Netflix trends will have caught a glimpse of — if not already binge-watched — the streaming giant’s overnight true crime sensation in Monster: The Jeffrey Dahmer Story.

Starring American Horror Story‘s Evan Peters in the titular role as the Milwaukee Cannibal, Monster chronicles the crimes of Jeffrey Dahmer, one of history’s most formidable serial killers. For the uninitiated, Dahmer was active between 1978 and 1991, during which time he was responsible for the murder and dismemberment of 17 young boys — most of whom were Black and brown — ranging from 14 to 32 years old. Due to the horrific nature of his crimes, Dahmer has become one of the most notorious murderers in all American culture. He was convicted of first-degree murder on 15 counts, therefore given 15 life sentences — one life sentence for each victim.

There’s no denying that Evan Peter’s portrayal of Dahmer is downright terrifying. The 35-year old Primetime Emmy Award winner — whose filmography covers that of Kick-Ass, X-Men and The Lazarus Effect — has earned the admiration of Netflix subscribers everywhere for his unsettling performance as Dahmer. In fact, many viewers were calling for Peters to be nominated for another Emmy. However, even with Peters’ stand-out run as Dahmer, respectful binge-watchers encourage viewers to keep Dahmer’s victims — and their families — at the forefront of their minds.

On Sept. 21, the same day that Monster premiered on Netflix, a viral video surfaced that features a side-by-side comparison of DaShawn Barnes’ portrayal of Rita Isbel in Monster versus the real-life courtroom footage. In 1992, Rita Isbell was allowed to give an emotional statement to the jury that would pertain to the long-lasting impact that Dahmer’s crimes had on the family members of the victims. During her testimony, Rita suffers an emotional breakdown, wherein she name-calls and threatens Dahmer. Barnes’ reenactment of Rita’s rage and heartache is thoroughly believable and commendable, but a member of the Isbell family has described the footage as “retraumatizing over and over again.”

On Twitter, a user by the name of Eric attests to being Rita’s cousin and a member of the Isbell family. While referencing the viral video mentioned above, Eric writes, “I’m not telling anyone what to watch, I know true crime media is huge rn, but if you’re actually curious about the victims, my family (the Isbell’s) are pissed about this show. It’s retraumatizing over and over again, and for what? How many movies/shows/documentaries do we need?” Continuing the thread, Eric adds another tweet that reads, “Like recreating my cousin having an emotional breakdown in court in the face of the man who tortured and murdered her brother is WILD. WIIIIIILD.”

Errol Lindsey was a Milwaukee resident that was murdered at the hands of Jeffrey Dahmer at age 19. Reports claimed that Lindsey had run an errand to get a key cut, but a fateful encounter with Dahmer meant that he wouldn’t be returning home that night. On April 7, 1991, Dahmer met Lindsey and invited him back to his apartment. Unlike most of Dahmer’s victims, who were homosexual, Lindsey had no interest in males. After agreeing to accompany Dahmer for some beers, Lindsey was drugged into unconsciousness by Dahmer, who proceeded to drill a hole in his skull and pour in hydrochloric acid, hoping to render him in a vegetative state. When questioned as to his motives, Dahmer mentioned that all he ever wanted was to control his victims, do as he pleased with them, and stop them from leaving. Therefore, he attempted to make “sex zombies” out of them.

Nevertheless, the drilling technique that Dahmer would later use on 14-year-old Konerak Sinthasomphone, inevitably failed and Lindsey regained consciousness. After a botched second attempt at pouring hydrochloric acid into Lindsey’s brain, Dahmer grew frustrated and strangled him to death. It was Lindsey’s sister, Rita, who spoke on his behalf in court and had to be restrained after threatening to kill Dahmer. Like many other families whose unpleasant memories will resurface from an exposure to Netflix’s Monster, the Isbells are shaken to their core. Despite DaShawn Barnes’ portrayal being accurate and respectful, the context in which she reenacts Rita’s wrath is simply too much to bare for some, much like the gruesome details of Dahmer’s crimes.