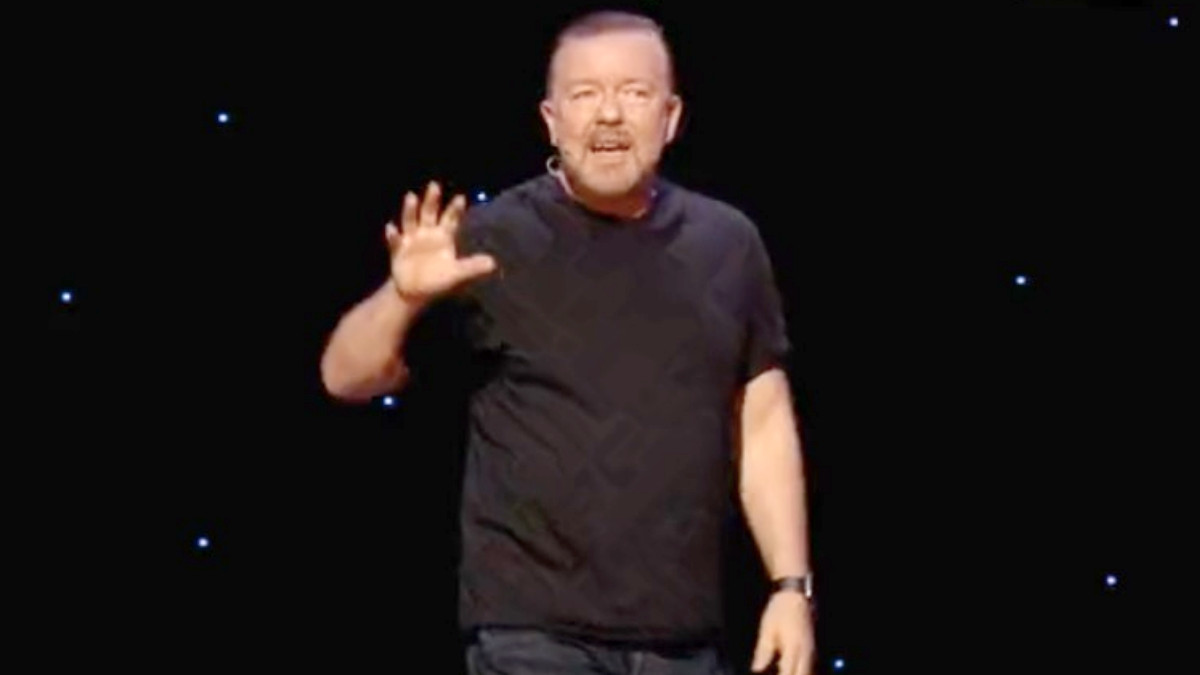 Ricky Gervais is back with a new Netflix comedy special, Ricky Gervais: SuperNature, which the 60-year-old comedian previously expressed hope of getting himself canceled over. But while that remains to be seen — since, from the sound of it, the special seems to be a greatest hits of Gervais’ two favorite targets, religion and trans people — it’s certainly not a great look for the streaming service, which is still dealing with fallout over the trans jokes in Dave Chappelle’s The Closer.

But speaking of Chappelle, Gervais’ new material sounds perfect for viewers who enjoyed The Closer, but didn’t think the trans jokes were quite on the nose enough. Thankfully, Gervais is not an unsubtle comedian.

According to those who have already seen the special, Gervais starts in on the trans jokes within five minutes, referring to cis women as “the old-fashioned women, the ones with wombs,” adding: “Those fucking dinosaurs.”

“I love the new women. They’re great, aren’t they?” Gervais continues. “The new ones we’ve been seeing lately. The ones with beards and cocks. They’re as good as gold, I love them. And now the old-fashioned ones say, ‘Oh, they want to use our toilets.’ ‘Why shouldn’t they use your toilets?’ ‘For ladies!’ ‘ They are ladies — look at their pronouns! What about this person isn’t a lady?’ ‘Well, his penis.’ ‘Her penis, you fucking bigot!’ ‘What if he rapes me?’ ‘What if she rapes you, you fucking TERF whore?'”

It’s starting to become clear why Netflix recently updated its corporate culture memo for the first time since 2017, which now requires employees to work on content that they may deem to be “harmful” or “counter [their] our own personal values.”

According to Variety, Gervais makes a loathsome attempt at redemption near the end of the special, telling his audience that “full disclosure,” in real life he supports trans rights just like he supports all human rights.

“Live your best life. Use your preferred pronouns. Be the gender that you feel you are,” he says, before adding: “But meet me halfway, ladies. Lose the cock. That’s all I’m saying.”

Releasing this special in its entirety is just a baffling move on Netflix’s part. As material from Gervais’ special began to go viral on Twitter, the reaction was polarizing — with many fans having stayed up late Monday night to watch, while the backlash already began simmering by Tuesday morning.

“Ricky Gervais has a new stand up show out on Netflix today,” tweeted one user. “Five minutes in and he’s making jokes about trans women attacking and raping people in public bathrooms. To him we exist only as a punchline, a threat, something less than human.”

According to journalist Eoin Higgins, Netflix sat on the special for months before releasing it, knowing exactly how this would play out. It certainly does seem a little too coincidental that it’s being dumped on a Tuesday, three days before season 4 of Stranger Things.

Another user pointed out that Netflix is burning up all of its Heartstopper goodwill “by showing Ricky Gervais being a massive sack of shit.” (One has to imagine that Elliot Page, trans star of Netflix’s hit series Umbrella Academy, is not going to be amused.)

Yet another user evoked James Acaster’s very good bit about Ricky Gervais being a transphobe from a few years back.

Others roasted Gervais for relying on the same tired material about religion. (He’s an atheist? Get out!)

Maybe Gervais will get his wish of being canceled after all. But given that Chappelle, Louis CK, and other problematic comedians continue to sell out arenas, even these supposedly “edgy” jokes are apparently still pretty safe to retread ad nauseam.