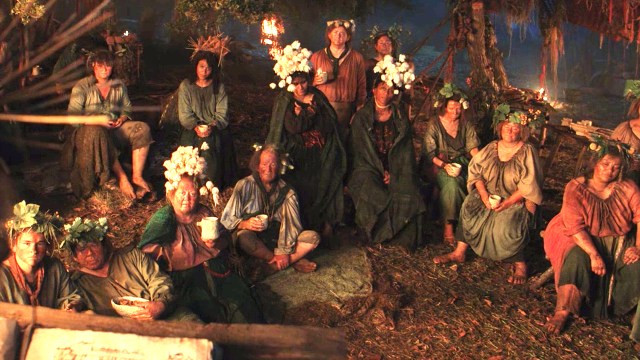 An unpopular fan theory is sparking debate among fans of The Lord of the Rings: The Rings of Power, after one viewer attempted to explain some of the Harfoots’ more negative qualities.

User JorusC took to the official Rings of Power sub-reddit to share their theory, leaning on many of the Harfoot-centric events as an explanation for their wild argument. They propose that Rings is setting the charming group up as the ancestors of a very different Tolkien race, using a range of notes about their behavior as backing for their theory.

JorusC leans on many of the qualities established thus far in the series as reasoning for their new postulation. Their fearful nature, use of camouflage, and supposed lack of a sense of community are all listed as traits that make them less Hobbit-like, and more akin to another race, but its there that JorusC starts to waver. The traits that follow are all much harder for fans to swallow, as they criticizes the Harfoots as being “completely without a sense of compassion” due to their willingness to abandon Nori’s father, and thus her entire family, should they fall behind. They also claim the Harfoots are callous, noting that, when they read out the names of those they’ve lost, several members of the group laugh.

“They evidently find the loss of family members to be humorous rather than a source of sorrow,” JorusC writes, before plunging into their last point against the Harfoots. Their final note claims that “they seem genetically incapable of creativity,” and leans on the fact that the group has yet to provide viewers with anything of musical note. This point actually seemed to connect with commenters the most, but we’ll get to that.

JorusC wraps up his post by summarizing each of their stated points, before finally proclaiming the race truly descended from Harfoots, in their humble opinion.

“A cowardly underground race who abandons or betrays their own for any excuse, laughs at the deaths of others, and creates horrific and vulgar caricatures of art? The Harfoots aren’t the ancestors of Hobbits. They’re the ancestors of GOBLINS,” the post concludes.

This assertion quickly stirred up debate among readers, a number of whom were in stark disagreement with JorusC. For one thing, Tolkien in clear in his writings that Harfoots are, in fact, the ancestors of Hobbits, but readers came up with plenty more to argue about in the post’s comment section. The post’s top comment does the best job of disproving JorusC’s points, breaking down that the show is striving to exemplify the struggles and cruelty of a nomadic lifestyle, as a way to explain the passion that Hobbits will one day have for the Shire.

Their fearful nature, ability with camouflage, and even lack of community are all explained in one simple line from user ApartRuin5962, who wrote “you can tell that their whole hiding game isn’t truly living in perfect comfort in nature, like the elves, but a difficult and fearful existence.”

“We’re meant to see how important the Shire and the protection of the Dunedain were to development of Hobbits as we know them, allowing the gatherers to become farmers, letting them grow up in safety, and allowing them to care for their sick and wounded in their comfortable homes,” they continue, before noting how on-point this idea is for Tolkien’s typical themes. The one thing they agree with? The lack of good songs.

“I agree that they should have more good songs, though. The Shire hobbits drop some bars in LoTR.”

This was largely the sentiment of everyone in the comment section, who quickly broke down JorusC’s theory and proved it profoundly wrong. It’s not a bad theory, given several of the traits displayed by the Harfoots, but JorusC is simply being too cynical. These notes are there to explain why the Shire is so necessary for these people, not to paint them in a negative light. It’s a hard life, being on the road. And this makes it all the clearer why Shirefolk tend to stick close to home, centuries in the future.

When considered this way, it can all be summed up by a quote from a far future descendant of these wandering nomads, one who owes their comfort and ease to the efforts of their ancestors: “It’s a dangerous business, Frodo, going out your door. You step onto the road, and if you don’t keep your feet, there’s no knowing where you might be swept off to.”