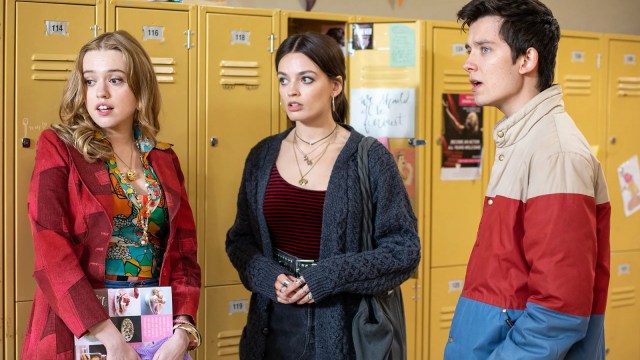 Sex Education season three was a huge success for Netflix, but it ended up tearing the hit teen comedy-drama’s fandom down the middle thanks to its exploration of a new romance for Otis Milburn (Asa Butterfield). While his will-they-won’t-they thing with Maeve (Emma Mackey) continued to be stretched out, Otis got together with redeemed mean girl Ruby (Mimi Keene). And some fans really loved them together, while others remained firmly on Team Maeve.

So folks are bound to have some thoughts about these first-look images for the show’s upcoming fourth season, which finally entered production earlier this month. Following the announcement that Schitt’s Creek star Dan Levy is joining the cast for this season, which is being described as a soft reboot, Netflix dropped two new promo photos. One reveals our inaugural glimpse at Levy in character, while the other features Otis and Ruby looking pretty cozy.

To jog your memory, season three ended with Otis and Maeve, who had finally acted on their feelings, being pulled apart when the latter decided to accept a scholarship to a college in the U.S. Levy will feature as Maeve’s new mentor, cult author Thomas Molloy, a tutor at Wallace University, a fictitious Ivy League school.

As for Otis and pals, the kids of Moordale will be attending Cavendish Sixth Form College this season, after the closure of Moordale Academy. The first plot details don’t mention anything about Otis and Ruby potentially rekindling their old romance, but with Maeve out of the country, it doesn’t seem far-fetched that he could reunite with his former flame.

Although not featured here, Ncuti Gatwa is also back as Eric Effiong this year, despite his status as the next Doctor Who. Other returnees include Gillian Anderson, Kedar Williams-Stirling, Connor Swindells, and Aimie-Lou Wood. To date, four cast-members from previous runs have confirmed that they’ve put Sex Education behind them.