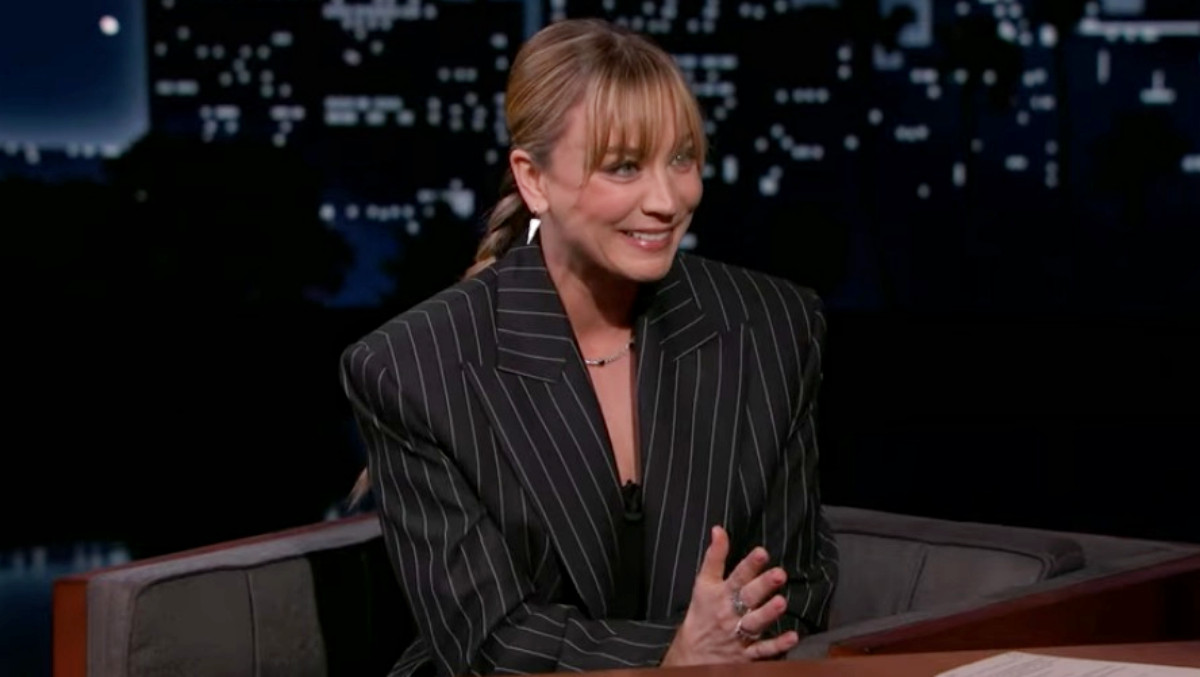 Kaley Cuoco stopped by Jimmy Kimmel Live ahead of the Season 2 premiere of her comedy thriller The Flight Attendant later this week, where she talked about one very memorable scene filming with legendary actress Sharon Stone.

Stone joins the cast this season, playing the mother of Cuoco’s character, titular flight attendant Cassie Bowden. As Cuoco explained to Jimmy Kimmel, the 64-year-old actually reached out to casting to personally vie for the role, but that was only the first surprise she literally had up her sleeve.

During the filming of one emotional scene, in particular, Cuoco recalled Stone sitting her down and asking how she felt about her “touching” her. “I said, ‘Whatever you want to do, Sharon, you are Sharon Stone — you do what you wanna do, I’m just so happy you’re here,'” Cuoco said.

“So we do the take, it’s this very long emotional scene, and at the end of the scene, she’s supposed to come up and say something very serious to me and walk out,” Cuoco continued. “She’s supposed to say, ‘I like you, but I don’t love you very much.’ So she says this line to me and she grabs my face, and she … whacks me.”

At that point, the audience gasped, to which Cuoco responded with a resounding, “I know!!!!”

“Hard? Like, for real?” asked Kimmel. “Oh no, real,” Cuoco deadpanned. “And, first of all, the reaction was about as real as you can get … I had snot coming out of my nose and I’m crying and I’m literally shaking, and they’re like, ‘Cut!’ and no one moves, no one makes a sound.”

“I just got bitch slapped by Sharon Stone,” Cuoco said, remembering feeling shocked and astounded in the moment.

Conferring with producers after the slap, she recalled them asking her if they should tell Stone that they had gotten the take, and hence, wouldn’t need to film another slap. “I said, ‘Listen, I’m gonna bet money that woman’s not slapping me again,'” she quipped. “She’s not gonna slap me again! We got the money take, that’s her Emmy win right there!”

However, Stone’s slapping hand was apparently just getting warmed up. Cuoco proceeded to explain that she slapped her not one, but two more times — and got just as genuine a reaction for at least the second slap.

“Three times I got slapped!” Cuoco exclaimed. “[The camera] wasn’t even on me in the third take!” At that point, she said that it was time to wrap the scene … and get some ice for her face.

Season 2 of The Flight Attendant premieres on HBO Max on Thursday, April 21, where you can watch the slap go down in all its glory.