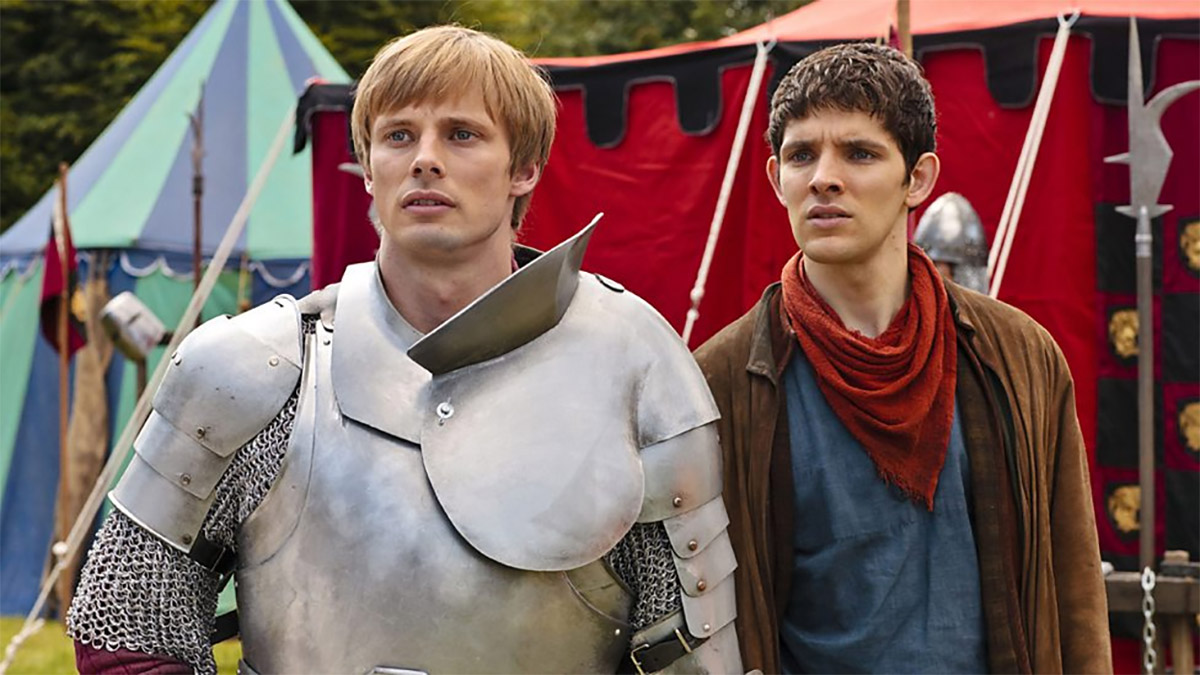 Merlin dazzled viewers for five full seasons between 2008 and 2012. During that time, the show grew a loyal fanbase with its blend of fantasy, action-adventure, and mismatched buddy charm. After an unassuming first season, this incredibly successful reimagining of Arthurian legend became a worldwide hit across 180 countries, and remains popular on Netflix today.

Merlin follows a young Merlin as he learns to deal with his burgeoning magical powers and the weight of destiny. This version of the story presents a fun twist on the recognizable tale, shifting Merlin from Arthur’s loyal and trusted magical advisor to his put-upon manservant.

Merlin is one of those shows that keeps viewers guessing. Is it a prequel that foreshadows the legends to come, or will it adapt and reinterpret the complete and often dark Arthurian story itself? Merlin builds up to a surprising conclusion by incorporating a number of classic tales, including Morgana Pendragon’s fall from grace, the quest for the cup of life, and the formation of the legendary Round Table. There is a real thrill in seeing this mythology unfold and witnessing the arrival of legendary knights like Santiago Cabrera’s Lancelot and Eoin Macken’s Gawaine. The fantastic chemistry between Colin Morgan’s Merlin and Bradley James’ Arthur remains the center of it all, as they grow into the powerful wizard and famous defender of Camelot from legend.

Merlin takes a fresh approach to these age-old tales. The show’s take on Camelot isn’t steeped in mysticism, but instead bans magic on pain of death as its rulers seek to bring the kingdom out of superstition and into a new age of prosperity. Merlin’s need to keep his secret hidden while also using it to protect Arthur provides much of the show’s comedy, drama, and tragedy.

While they never fall out of fashion, Arthurian tales have often fallen short on screens big and small. Merlin’s good-natured approach to reshaping its source material stands apart as one of the best.

If you’re looking to recapture some of that Merlin magic, there are a few shows that come close.

Lev Grossman’s 2009 novel The Magicians spawned two sequels, two comic adaptations, and a five-season adaptation that aired on SyFy. This parallel universe tale of high fantasy and magical conflict drew on many inspirations, including TH White’s Arthurian classic The Once and Future King. In this series, Quentin Coldwater takes the role of Merlin, but follows a markedly different path. His destiny requires a balancing of his magical training at Brakebills University with saving the world from a threat posed by his favorite childhood book.

The BBC’s most famous family drama delivers the camaraderie and action of Merlin in spades. Over nearly six decades, the Doctor and his companions’ adventures through time and space have entertained with a mix of comedy and genuine scares. In fact, it was the show’s mid-2000s resurgence that paved the way for Merlin’s arrival in 2008. You won’t run out of binge-able material for a while, with hundreds of episodes to choose from, and there’s even a Doctor Who arc that dips its toes into Arthurian legend, in the 1989 story Battlefield.

If you’re looking for a more adult take on Arthur and Merlin’s story, this short-lived series could be the ticket. Creators Chris Chibnall, the current show runner of Doctor Who, joined Michael Hirst in bringing together an incredible cast for this sexier, but also sillier, take on Arthurian legend. Joseph Fiennes’ Merlin joins Jamie Campbell Bower’s Arthur in an epic fight against Eva Green’s Morgan.

Camelot arrived near the end of Merlin’s run and just at the start of Game of Thrones, to which it drew inevitable comparisons. In the end, Camelot’s phenomenal cast was its downfall. Starz declined to continue the series after its first year due to cast scheduling conflicts.

This reassuringly familiar fantasy tale adapted Terry Brooks’ The Sword of Shannara trilogy. MTV fully committed to the series’ first year before it ultimately concluded on Paramount Network. The story, which follows a human, elf, and human-elf hybrid as they combat an ancient evil, was unfortunately cut short. Despite its short lifespan, this series was massively enhanced by its decision to film in stunning locations around New Zealand.

Another teatime BBC drama from the mid-2000s, this series takes inspiration from the legendary English folk hero himself. Its anachronistic approach — modern English dialogue and attitudes set in the mud and forest of Sherwood — drew criticism at first. Soon after, however, the series earned a cult following. It almost moved too fast for its own story, leaving to a an extensive cast shake-up in its final year. One highlight of the show’s final season was King John’s arrival — in the form of a devilishly charismatic Toby Stephens.

Terry Pratchett and Neil Gaiman’s novel worked even better on screen than fans initially hoped, primarily thanks to a stellar cast headed by Michael Sheen as the angel Aziraphale and David Tennant as the demon Crowley. It’s another show that knows how to make the most of its charismatic leads.

Throw in armageddon and a few eccentric jokes, and this show is (mostly) a heavenly delight. One criticism is its length, which is far too short at only six episodes. But the apocalypse hasn’t been diverted just yet. A second series is currently filming, which picks up on original ideas devised by Pratchett and Gaiman after the first book was published.

The BBC’s take on action-adventure in 17th century France was initially envisioned as a Merlin-style adventure. It arrived as a more adult series, carrying heavier themes and action that suited its source material. Alexandre Dumas’ books were only the starting point to this series, however. The Musketeers ended up as a fun series that balances old-fashioned storytelling with romance and swashbuckling defense of king and country. It’s great cast includes former Lancelot Santiago Cabrera as another romantically-conflicted hero, Aramis.

A recent Netflix fantasy that adapts two books in Leigh Bardugo’s Grishaverse, Shadow and Bone‘s first season shows heaps of potential. When the kingdom of Ravka is threatened by the impenetrable darkness of the Shadow Fold, orphan Alina is shocked to discover her previously unknown summoner powers. The story follows Alina as she gradually blends, and bonds, with the world’s magical elite, known as Grisha. Some of the show’s best moments are spent half a world away in Ketterdam. These moments follow the Dredges, a criminal organization nestled in the grungy city’s underbelly. This series manages to capably incorporate the universe’s dense mythology while managing to remain compelling, and a second season is being conjured up as we speak.

Merlin producer Johnny Capps attempted to recapture the show’s magic with a voyage into Greek mythology. Atlantis threw together a similar dynamic to Merlin, following the lowly character of Jason, a man destined to become a mighty hero and leader of the Argonauts.

Unlike Merlin, which concluded its story at its peak, Atlantis ended its journey just as the myths behind it kicked off. Regardless, there’s plenty of recognizable drama and comedy to be mined from the fate of Atlantis, which boasts slightly better weather than Camelot.

The Dark Crystal: Age of Resistance

Another high-profile stab at fantasy on Netflix, this series gives new life to Jim Henson’s enthralling world of Thra. This captivating series returned to Thra a full 37 years after The Dark Crystal was initially released. It may have only earned one season, but there was plenty to love in each of its 10 episodes. Once again, three is the magic number as a delightful trio seeks to unite Gelfling clans against the terrifying Skeksis to save their planet. It is a delight to return to this fantastical world, and the Jim Henson Company hopes that the story has more yet to tell.

Another Netflix gem, The Witcher phenomenon has continued in live-action, scoring great numbers for the streaming service. The second season of the series, released in late 2021, took a less confusing approach to the source material than its first season, ditching the time-jumping format and ironing out timelines to present a far more approachable mix of terrifying monsters and even worse humans. It is an action-packed alternative to Merlin, with one of fantasy’s great outsiders at its center.

Da Vinci’s Demons twists history rather than fantasy through its three seasons. Renaissance-era Italy allows for a focus on politics, with Tom Riley seeping charisma as the fabled inventor and scientist. Over the course of three seasons, Da Vinci’s innovation mixes with intrigue and romance as the young inventor struggles with his inner demons and the complexities of working for the Medici family.