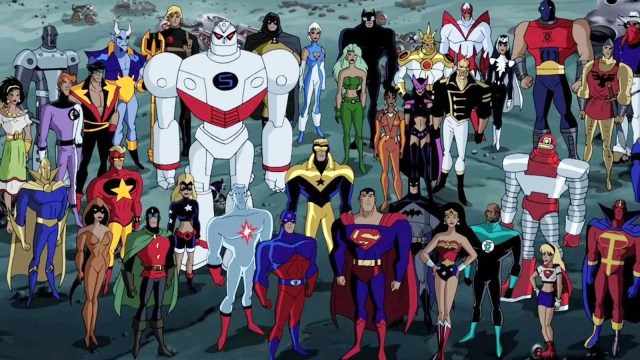 DC has a strong record of producing some of the best animated superhero shows ever made, and at times, they’ve even exceeded the comic books. Superman was first animated all the way back in the 1940s in a series of seventeen animated short films. Max Fleischer’s Studios produced the first nine episodes of Superman, and Famous Studios produced the remaining eight. This brought the Man of Steel to life in a new way and it marked the beginning of DC’s animation domination.

In the 1990s, legendary series developers Bruce Timm, Paul Dini, and Alan Burnett helmed much of DC’s animated universe affectionately called the Timmverse. It started with Batman The Animated Series produced by Timm, Dini, and Mitch Brian in 1992 and branched off into its own universe with multiple in-continuity stories. This created a cohesive storyline throughout the various shows and movies, the likes of which haven’t been seen since. These stories often influenced the comic books, with Harley Quinn’s first appearing in BTAS and then making her way to the pages of comics and eventually the movies.

So, here is the list of DC’s 10 best animated shows.

This position might seem low for a show this good, but considering how elite this list is, Harley Quinn making it to the top ten is no easy feat. Harley Quinn is an iconic character and the animated series smashes any expectations by delivering something that’s genuinely laugh-out-loud funny and tells a meaningful story. Watching Harley find her independence from the Joker to stand triumphant is incredibly fulfilling and the cast of characters surrounding her multiple the enjoyment a hundred-fold. It’s hard to imagine a Harley Quinn story being any better than this.

9. Batman: The Brave and the Bold

Batman: The Brave and the Bold proves that Batman does work well with others. Watching this vintage Batman partner with other DC heroes is enjoyable for hardcore fans of the DC Universe and those just getting introduced to it. It could have easily wandered into parody territory, but it never feels like it’s done in a mocking way. There are superb action sequences, wholesome humor, and even some musical moments that’ll get stuck in your head. This animated series proves how versatile DC can be.

Pulling off a Green Lantern show seems like it would be complicated with so much space to cover, but this series made it look easy. Hal Jordan is the Green Lantern of Sector 2814 and with his power ring he can manifest anything at will and he uses this power to defend the galaxy. Hal comes across many different races, allies, and enemies, and the series does a solid job of capturing the core of his character. It’s unfortunate that it was only given one season because it still had so much story to tell.

The concept of Batman Beyond was probably one of the more daring choices in DC animation. The series is set in a futuristic Gotham City with brand new perils and a neo-gothic aesthetic. It follows teenager Terry McGinnis who has a bit of an attitude problem but has a lot of potential to become much more. Under the tutelage of a senior Bruce Wayne, Terry learns to become the new Batman with a technologically advanced Bat-suit. The dynamic between the two offered something new and the viewer couldn’t foresee all the twists and turns that took place in this uncertain time. It’s both a fresh take while paying respect the history of Batman.

Young Justice might be one of the best representations of the DC Comics stories primarily because it focuses on the legacy aspect of the universe. In other DC team shows, there’s not much time spent on other characters from different generations. In Youn Justice, the young heroes’ connection with their mentors and their own individual families puts it on a personal level that no other show on this list is on. As we watch the superheroes battle threats both internally and externally, we also see them grow into heroes of their own in a way that feels organic so that you feel the weight of what’s happened before.

Superman the Animated Series distills the best parts of Superman into a well-told story. It perfectly applies Superman’s origins and explores his challenges hiding his secret while saving the world very well. His amazing feats and immense power are second to the goodness he stands for as he fights to do the right thing. The show also depicts how hard it can be for him as his challenges grow and it’s harder for him to hold on to his positive worldview. This isn’t just a cookie-cutter feel-good story, it shows how hard it can be to maintain hope when there’s so much wrong in the world.

Justice League: Unlimited took it to the next level by opening up the story for other DC heroes to join in on the action. Beyond the Big Seven, characters from all over the world were allowed to join the league and it made for some of the best combinations. Green Arrow, Vixen, Stargirl, Vigilante, Shining Knight, The Question, and Huntress were just some of the heroes who got a spotlight in an ongoing story that brought together the DC Universe at large. The villains got more dangerous and so the show had to get bigger.

At first, Teen Titans seemed like the biggest risk ever. It relied on an anime-inspired style and it was a mix of action/comedy. It didn’t fit neatly into the Timmverse’s aesthetics, and yet Teen Titans created something unique all to its own. As the series goes it really finds the balance between delivering a solid story and delivering solid laughs without undermining the story being told, which is how it revitalized the franchise in the early 2000s. The end result was a show that had some of the best episodes in all of DC animation, so much so that fans are still unable to let the series go and are hoping for more content all these years later.

The Justice League cartoon was the introduction to the team for many people. It continued after Batman The Animated Series and Superman the Animated Series, and brought in Wonder Woman, Green Lantern John Stewart, Martian Manhunter, The Flash Wally West, and Hawkgirl and learned to work together to become a viable force to protect the earth. The series explored their individuals stories and you really felt like you got to know these characters behind their superhero identities. Justice League sets the bar high for superhero team stories.

To no surprise, Batman The Animated Series is the winner and for many, it’s seen as the quintessential Batman interpretation that defined a generation. It doesn’t pull any punches in telling powerful Batman stories that don’t feel like they’re pandering to the audience. It’s Batman distilled in a way that’s consistent and well-crafted and perfectly captures the core of his character. It reminds people why he’s such a mesmerizing character with episodes that range from poignant, dark, and hopeful, and has won multiple awards for its high quality. With voice work by the incomparable Kevin Conroy as Batman and Mark Hamill as the Joker, it literally doesn’t get any better than this and is still what every superhero animated series is compared to.