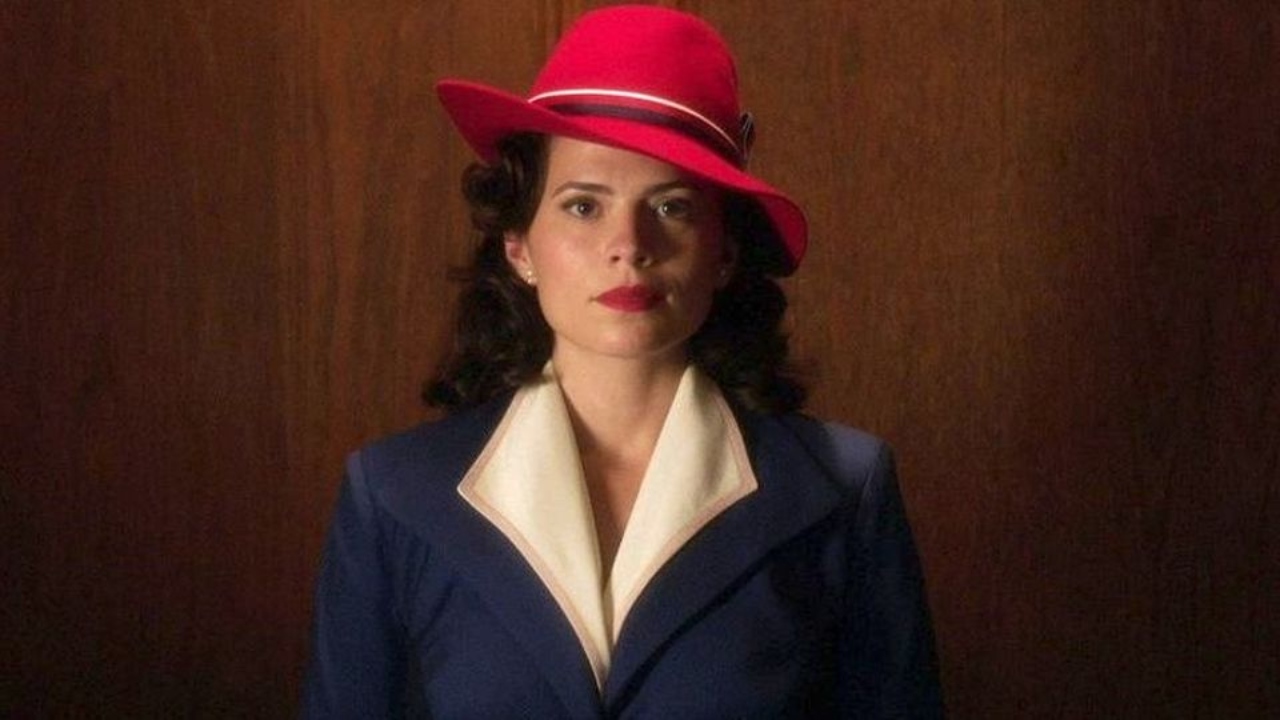 After making her on-screen cinematic debut in Captain America: The First Avenger and reappearing in the 2013 Marvel One-Shot short film Agent Carter, Hayley Atwell reprised her role as SSR Agent Peggy Carter in the ABC solo series, Agent Carter. Set in the Marvel Cinematic Universe (MCU) and sharing continuity with the other film and series franchises, Agent Carter opens in 1940s America, where Carter attempts to balance life as a secret agent with that of a single woman in an old-fashioned time period.

Agent Carter introduces the interconnecting origins of several characters and storylines from MCU films, flawlessly encapsulates the ’40s time period, and somehow finds the middle ground between edge-of-your-seat action and the humdrum routine of everyday life as Carter navigates work and relationships. Even with the slice-of-life moments, Agent Carter never slows its roll, not even for a single episode. It undoubtedly stands its ground against other, more well-known Marvel series.

While the engaging plotline of Agent Carter makes it too difficult to choose the best episodes, we have ranked the most memorable, unmissable, and above all, bingeworthy episodes from the timeless series:

“Smoke & Mirrors” perfectly juxtaposes the history of Peggy Carter with that of Whitney Frost and sets up the conflict for later episodes. Moreover, viewers are shown the in-depth backstory of Whitney Frost; they’re given a firmer understanding of what drove her to aim for a career in science and pursue fame as if it were all she had. In “Smoke & Mirrors,” we see a flashback of adolescent and teenage Whitney Frost (played by Agnes Cully), who was an intellectually gifted scientist, inventor, and fixer-upper.

On the other hand, we see Peggy Carter receive an offer to join the Special Operations Executive due to her skills as a code breaker. Witnessing the contrast in upbringings and career choices really encapsulates how Peggy and Whitney are different but also the same in many ways. More than anything, “Smoke & Mirrors” is an insightfully “meaty” episode with plenty to keep the pace steady.

For an episode that focuses more on riveting conflict and less on furthering the narrative, “The Blitzkrieg Button” undoubtedly takes the cake. But even though it’s a more “do” than “say” plotline, the episode is just as gripping as the rest of the episodes on this list. Agent Carter and Edwin Jarvis steal and study an unthinkably powerful invention known as the Blitzkrieg Button, which can take out the electrical grid of all of New York and beyond. Think about it like a long-range EMP.

When following her instincts, Carter presses the button, but rather than sending out disruptive electromagnetic waves, the button opens to reveal a vial containing a sample of Steve Rogers’ blood. “The Blitzkrieg Button” drops a real bombshell on Agent Carter as all roads lead back to Steve Rogers and that relationship is further explored after its initial development in the Captain America trilogy. Furthermore, “The Blitzkrieg Button” is a huge turning point for Dottie Underwood, who reveals herself as an undercover Russian assassin after posing as the “girl next door” to get closer to Peggy Carter.

On February 24, 2015, the season finale for Agent Carter premiered and reeled in over four million viewers. “Valediction” sees Peggy Carter and Dottie Underwood, after chasing tails for several episodes, come face-to-face when Howard Stark is hypnotized by Ivchenko, a resentful Russian mastermind, into operating a war plane to drop rage-inducing gas on Time Square. Grab the tissues for this one as we get a touching moment between Carter and Stark. When Howard comes under the influence of hypnosis, he becomes delirious and starts to believe that dropping the gas will somehow allow him to repent for his mistakes in the past as he holds himself responsible for inadvertently forcing Steve Rogers to sacrifice himself.

Agent Carter, attempting to prevent this, reminds Howard that Steve is gone and nothing will bring him back, then reassures him that he is a good man and just made some poor choices. In the end, after fighting Carter, Dottie Underwood disappears and the finale ends on a cliffhanger. Throughout its run-time, “Valediction” keeps it interesting with constant twists and turns, doing Agent Carter justice as a finale that never once slows down.

For anyone that anticipated the eventual meeting of Peggy and Dottie, “A Sin to Err” undoubtedly delivers. When closing in on Dottie, Carter and Jarvis start to investigate all the women that notorious womanizer Howard Stark had seduced (or been seduced by) in the past few months. They believed that the female operative (yet unknown at this point) was used against Stark to kill Ray Krzeminski, another SSR agent. When Carter returns to her apartment to retrieve the stashed sample of Steve Rogers’ blood, she encounters Dottie Underwood, who knocks her out with a kiss, lips laced with “Sweet Dreams” — a sleep-inducing lipstick — but fails to kill her before authorities arrive to apprehend Carter.

“A Sin to Err” features the first same-sex (female) on-screen kiss in the MCU. Disregarding the episode itself, that was a huge step forward for LGBTQ+ representation in the MCU. Most importantly, “A Sin to Err” ticks all the boxes for balancing action, suspense, thrills, unpredictability, and of course, taking the viewers on an emotional rollercoaster.

Wedged between “A Sin to Err” and “Valediction”, two strong episodes, the pressure was on for “Snafu” to uphold the standard — and it did. All of the dirty secrets come to light in “Snafu” when Peggy faces the co-workers that she had deceived while working as a double-agent for fugitive Howard Stark. In this episode, all the tables turn and Peggy is under interrogation for co-conspiring against the States. Above all else, the death of SSR Chief Dooley really triggers the waterworks. Granted, supporting characters are difficult to attach ourselves to, but the relatable character of Dooley was a family man doing the best he could.

As mentioned in “Valediction,” Stark intends to (under the influence of hypnosis) drop gas on Times Square that will incite riots, brawls, and murders across New York. In “Snafu”, the nature of the gas becomes clear after Dottie plants a gas cylinder in a movie theater and the patrons become maniacal and start attacking one another. In the penultimate episode, a lot of questions are answered and the puzzle pieces start fitting together. “Snafu” is a crucial source of development for the season and starts connecting the dots for the viewers.

As the pilot episode for Agent Carter, “Now is Not the End” had the responsibility of setting the tone for the time period as well as the series’ relative independence from the MCU as a stand-alone show. In the beginning, Carter is carrying out administrative work, demoted from a field agent serving the country to a personal assistant and coffee-maker for the male operatives. The episode introduces its main protagonists and helps viewers settle in for what awaits. Peggy, Howard, and Jarvis are given distinctive personalities and purposes, but Carter shines as the female lead, entertaining the audience with her immeasurable wit, charm, and combat skills.

This pilot has disguises, gadgets, explosions, and the first impressions for recurring characters, whose flamboyant and likable personalities will keep you thoroughly engaged. There is something for everyone in the Agent Carter pilot, whether it be the ’40s fashion, the amusing characters, or the captivating plot.

On the flip side of the pilot, we have the finale, the real finale. After just two seasons, ABC canceled Agent Carter due to low ratings, but even if it never planned to return, it went out with a bang. “Hollywood Ending” sees the culmination of two seasons worth of development — both character and plot-wise.

Throughout Season 2, Whitney Frost abandons the false hopes of becoming an actress and pursues her true passion: science. Initially planning to exploit Zero Matter for its powerful properties, an unfortunate mishap leads to an explosion that makes Frost absorb the dark force and become a matter-eater via physical touch. When seeking to open an interdimensional rift and become all-powerful, Peggy confronts Whitney, assisted by her companions, and defeats her.

All the overarching narratives come to fruition when “Hollywood Ending” reaches its climax and Whitney is admitted to a mental asylum, allowing Peggy to pursue a normal life with Daniel Sousa. Needless to say, the episode never skips a beat when orchestrating the perfect blend of all crucial ingredients: narrative, characters, tension build-up, and a gratifying resolution.

After her disappearance in “Valediction,” it was uncertain whether or not Dottie Underwood would make a miraculous return. In “Life of the Party”, Peggy visits an incarcerated Underwood and recruits her as an ally against her better judgment. Following the “friends to enemies” trope, Carter and Underwood singlehandedly build the tension and maintain it throughout the episode as viewers continuously ponder the inevitable: Will Dottie double-cross Peggy? Spoiler: she inevitably does.

Even more so, the thrill of an undercover operation helps to keep the plot interesting, especially as there are so many different elements at play; Dottie being undercover, Peggy overseeing the infiltration, Whitney’s growing suspicion of an unsavory presence, and the SSR plotting to expose Carter’s operation. Again, “Life of the Party”, like other episodes, leaves viewers anticipating the outcome when Dottie is kidnapped by Whitney and her co-conspirators. Without a doubt, “Life of the Party” is one of the overall superior episodes as the pace of the plot quickens and the stakes start reaching new heights.

Who doesn’t love a musical number? After the events of “The Edge of Mystery,” Peggy is knocked unconscious in the back of a transportation vehicle and dreams up an overview of her life as a theatre producer. Agent Carter pulls out all the stops in its penultimate episode, which brings back familiar faces like Angie Martinelli and Dottie Underwood to co-star in Carter’s imaginary musical. As Peggy, Sousa, Jason, and Angie sing about her conflict of interest between male love interests, Jason and Daniel, it becomes clear that Peggy is indecisive about who she wants to pursue romantically.

Seeing Angie return, if only for a brief moment, gives a nostalgic feel to the year-long series, especially as Carter left Angie back in New York and she never appeared otherwise. Granted, the musical does make the narrative feel disconnected, which takes away from the intensity of the central plot, but Hayley Atwell’s heavenly singing makes up for any flaws in the production values. “A Little Song and Dance” really is a hidden gem of an episode that was so delightfully unexpected yet eagerly welcomed.

Now, “Monsters” deserves the top spot for many reasons. Very rarely does Marvel ever explore the dark and gritty themes that underly life as we know it. Perhaps the closest examples are Jessica Jones and Deadpool, which depict sexual assault, trauma, terminal illness, and illegal experimentation. In “Monsters,” Whitney Frost shows her true colors when Dottie Underwood is captured and tortured for information. Honestly, Bridget Regan and Wynn Everett have unparalleled chemistry that pits two villains against one another — a matchup that isn’t often seen.

Besides the magnetic chemistry on all sides, Everett’s Frost also severely injures one of the most likable characters in the entire series: Ana Jarvis. Frost lures Carter and Jarvis away from Jason Wilkes, whom Whitney plans to capture in order to extract Zero Matter from him. In the process, Whitney is encountered by Ana Jarvis, Edwin’s wife, and Whitney mercilessly shoots her to aid her own escape. If ever there was ever an embodiment of evil, Whitney Frost is it. “Monsters” takes a chance by bringing darker themes such as child experimentation and self-harm to light, as well as allowing the actors to truly shine in their respective roles.

While the current streak of Marvel shows has, more or less, established that the studio is not planning to label shows like Agent Carter as MCU canon, the series will still continue to live rent-free in the memories of every MCU fan out there.