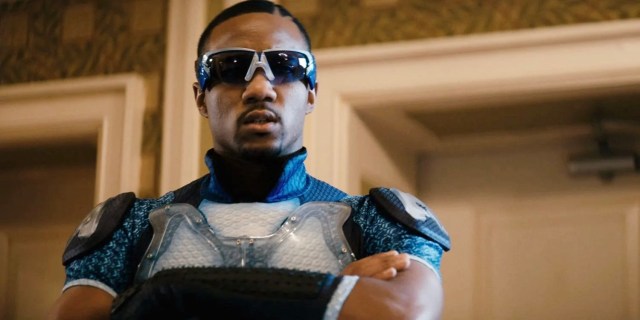 Amazon’s The Boys is currently filming its fourth season. The first three have soaked viewers in blood, guts, and bodily fluids generated through intimacy, and has showcased a giant penis, but apparently, the violence in the next episodes may top this.

A-Train actor Jesse T. Usher reveals the information in a new article published by Collider today. The 30-year-old does not say if there will be more or less violence but does note all involved did not expect what is coming and fans should not at this time, too.

A tantalizing picture of A-Train with his face soaked with blood spatter was recently posted to the show’s Twitter account and its visual effects leader Stephan Fleet said he cannot unsee what he has witnessed during shooting.

Although some fans will only believe it when they see it.

The first three seasons of The Boys have 24 episodes combined. The Boys Presents: Diabolical spinoff also has eight episodes, and, at this time it is not known if it will be coming back for another season of animated stories in an anthology presentation. The show’s spinoff Gen V recently wrapped filming, to The Boys cinematic universe keeps getting bigger.

So far, there’s no word on when all the blood and guts of season four will be making its way to our screens, but We Got This Covered will keep you in the loop.