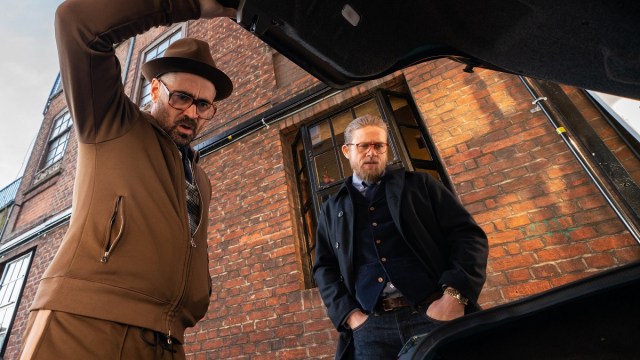 Following in the footsteps of several successful film to TV ventures, Guy Ritchie’s 2019 movie, The Gentleman, is making its way to the small screen.

The acclaimed crime thriller, that starred Matthew McConaughey and Colin Farrell, will be adapted for streaming on Netflix with Ritchie and some other familiar faces from the Ritchieverse joining him on the adventure.

This is not Ritchie’s first time doing something for television. The British director created and cowrote a series based on his 1998 breakout hit Lock, Stock and Two Smoking Barrels for Britain’s Channel 4. There was another series based on Ritchie’s 2000 release Snatch that aired on Crackle, but he wasn’t involved with that one.

What we know about the cast of The Gentleman

First off, no, McConaughey is not joining the main cast. Neither is Colin Farrell, Hugh Grant, Charlie Hunnam, Jeremy Strong, Henry Golding, or any of the rest of the cast from the film. Another big name known to many Ritchie fan is on board, however, along with quite a few other pretty well known names .

Vinnie Jones, the Ritchie veteran from his original hit — and maybe still top film — Lock, Stock and Two Smoking Barrels, as well as Snatch, will be in the series. Joining him is everyone’s favorite villain these days, Giancarlo Esposito, who is fresh off Better Call Saul, and still immersed in The Mandalorian and The Boys. Alexis Rodney recently joined the cast as well.

Other cast members that we know about are the lead of the series, Theo James, as well as Kaya Scodelario, Joely Richardson, Daniel Ings, and the almost legendary Peter Serafinowicz. We can hope for and watch for signs of cameos from some of the movie’s big names, or, they could be introduced over time if the show is a hit and goes on for a few seasons.

When’s it hitting? The release window

The Gentleman has already started production, hitting the ground running over in the United Kingdom on Nov. 7. Reports so far have the series running eight episodes for its first season, with filming expected to continue into the spring of next year. Shows usually don’t hit the airwaves so soon after they’ve wrapped filming, so we could possibly see The Gentleman hitting Netflix in the winter of 2023.

Is it following the movie? What’s what regarding the plot so far

The Gentleman Netflix series will be set in the same world as the movie, so everything you saw happen in the film is canon for the show. From there, things could go a lot of different ways. In the movie, McConaughey plays Mickey Pearson, a drug kingpin in charge of a large marijuana ring. He’s from the US, but lives in England, where the majority of the film is set save for some flashbacks.

The show, according to Variety, is said to come after the events of the movie. The lead character Eddie, played by Theo James, inherits an estate from his father and learns that it’s actually part of McConaughey’s character’s empire. According to Netflix, Eddie is the estranged son of an aristocrat, where he gains said inheritance.

Press your double-breasted suit and shine those brogues because it’s time to step back into the world of The Gentlemen. Guy Ritchie’s 2019 film is getting the series treatment, with Theo James leading an eight-episode journey into the messy underground politics of upper-class weed farms.

Ritchie will direct the first two episodes of the first season. He will also be on board as executive producer, creator, and cowriter along with Matthew Read.

The world of The Gentlemen is a little bit of me. I’m thrilled that with Netflix, Miramax, and Moonage, we have this opportunity to inhabit it once again. We’re looking forward to bringing fans back into that world, introducing new characters and their stories, and I’m excited to be doing it with this extremely talented cast.

The original movie, The Gentlemen, is now streaming on Netflix for those that want to revisit that world, or even check in for the first time. It’s one of if not the strongest of Ritchie’s work to date, and the receipts show that as well, as the movie made more than $115 million at the box office on a budget of $22 million.