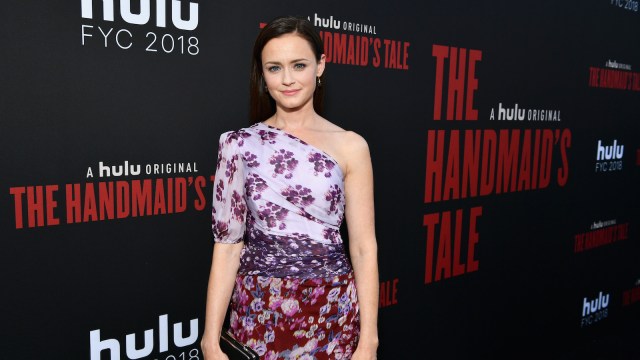 The following article contains spoilers for the first episode of the fifth season of The Handmaid’s Tale.

The fifth season of The Handmaid’s Tale is finally here. The adaptation of Margaret Atwood’s novel of the same name depicts a dystopian American society in which fertile women are forced to give birth for their masters. The series stars Elisabeth Moss as June, as one of these women, who are called Handmaids. The series also stars Yvonne Strahovski, Ann Dowd, O-T Fagbenle, Joseph Fiennes and Alexis Bledel.

However, Bledel had announced that she would not be coming back for the fifth season of the series. Fans have obviously been spending the last few months wondering how exactly The Handmaid’s Tale would handle her departure, so let’s unpack what happened to Bledel’s character Emily at the beginning of season five.

What happens to Emily in The Handmaid’s Tale season five?

They take a bit of time in the first episode to see June celebrate her murder of Fred Waterford (Fiennes), before addressing exactly what happened to Bledel’s character Emily. June eventually wonders what happened to Emily who had previously been dealing with her trauma from being a Handmaid in Gilead but was now living with her child and wife Sylvia, played by Clea DuVall. June ventures to Emily and Sylvia’s house, but nobody answers the doorbell. Sylvia eventually walks out and tells June that Emily had left and that she has taken the fight to Gilead. Sylvia assumes that she has seen the last of her wife as she left without saying goodbye to their child. It’s presumed in the show that Emily will not contact Sylvia or June again.

This does leave it open for Bledel if she does wish to return for the sixth and final season of the series, but it seems rather unlikely. It’s unclear why the actress chose to leave The Handmaid’s Tale in the first place as it was an impactful role in her career. First rising to popularity as Rory in Gilmore Girls, Bledel has starred in film and television, consistently working since 2000. She was nominated for four Emmy Awards during her time on the show, winning Outstanding Guest Actress in a Drama Series in 2017, for the first season of the series.

After she announced her departure from the series in May, her husband Vincent Kartheiser — who played Pete Campbell on the series where the pair met, Mad Men — filed for divorce. It would be unfortunate if issues in the actress’s personal life prevented her from reprising her role as Emily. Again it’s unclear whether this was her issue, but let’s hope whatever prevented her from returning to the series isn’t an issue anymore and that she was just taking some time, for whatever reason.