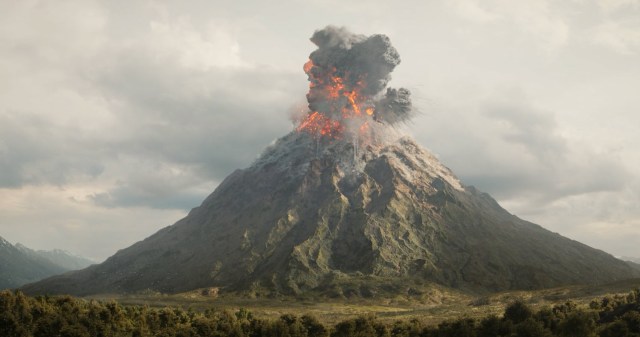 This week’s Rings of Power episode finally explored what the show had been slowly building up for several weeks. As Adar’s armies clashed with Galadriel’s Numenorean reinforcements, Sauron came out on top and got what he was probably aiming at from the start.

Indeed, with Waldreg breaking open the Ostirith dam and causing Orodruin’s eruption, the Southlanders will be hard-pressed to continue calling that pastoral land home. Mount Doom has now risen from the molten ashes of Amon Amarth, and Mordor is born.

Addressing this development in a recent chat with The Hollywood Reporter, here’s what showrunners J.D. Payne and Patrick McKay had to say about this cliffhanger and its significance to Tolkien’s world at large.

“A huge theme in Tolkien is the environmentalism and the way machines and industrializations destroy the land,” McKay said. “We wanted that to be central and core all the time. It’s a thing that comes up again and again throughout the show. So in the writers’ room, we asked: What if Mordor was beautiful? All bucolic like Switzerland. And then what could happen that could transform it?

“We talked about the poisoning of the land – which starts in the first episode with the cow. Then you find out about the tunnels being dug and sulfur going up into the air. It all builds towards this geologically realistic way of igniting the mountain which now blacks out the sky for a very practical reason — Adar, our villain, sees the Orcs as his people and they deserve a home where the sun doesn’t torment them. We’re hoping it will take people by surprise.”

It definitely did take most viewers by surprise. The once green plains of the Southlands will now take on a more familiar face, that which we’ve seen countless times before through Peter Jackson’s Lord of the Rings trilogy.

As for whether this was all the work of Sauron or Adar’s initiative, or that they all inadvertently played into the big bad’s hand, only time will tell. One thing’s for certain, though; the people of the Southlands will no longer find the place habitable, so Halbrand’s journey has basically been for nothing. Unless the mysterious character turns his back on Galadriel and decides that swearing allegiance to the forces of Shadow, like his ancestors did, suddenly doesn’t sound like such a bad idea.

The Rings of Power will continue next Friday with its penultimate episode on Prime Video.