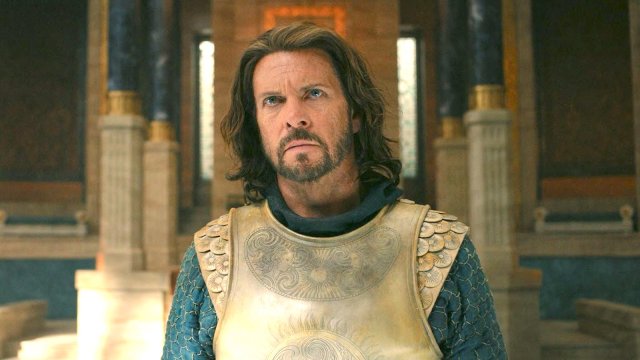 The Lord of the Rings: The Rings of Power featured some of the most notable names from Tolkien’s epic writings, and Elendil comfortably fits that definition. Lloyd Owen plays the Númenorian Sea Guard captain, and his actions set in motion events that reach all the way to the Third Age.

In an interview with Entertainment Weekly, Owens described playing such a pivotal character whose story has gone unseen in live-action, in spite of his massive importance to the story.

“That’s the great privilege of this job, actually, that he is this iconic character. He’s a hero archetype. But Tolkien wrote very little about him. There are just a few signposts along the way to his death. It’s a great opportunity to open him up as a fully three-dimensional human being, and I think JD [Payne] and Patrick [McKay], our showrunners, have done a great job so far setting this man up. They’ve added that he’s recently widowed, that he’s trying to bring up some grieving adult children who are also struggling, and that he’s recently moved into the capital city of Númenor right at the point where civil society might be breaking down, potentially. The personal and the political are perfectly combined in him. That’s the great excitement of it, as well as the responsibility, obviously, of hopefully fulfilling people’s expectations and imaginations.”

Elendil makes his first appearance in The Rings of Power‘s third episode “Adar,” when he rescues Galadriel (Morfydd Clark) and Halbrand (Charlie Vickers) from their tumultuous sea voyage. He believes that this turn of events is a sign per the Sea Guard’s tagline, “The sea is always right.” He then takes the two new visitors to the the Island Kingdom of Númenor, and the Noldor Elf doesn’t receive the kindest of welcomes. Elendil, however, proves to be an open-minded and noble figure willing to help Galadriel in her quest of discovering Sauron’s mysterious mark.

Viewers are also introduced to his son Isildur (Maxim Baldry) and daughter Eärien (Ema Horvath), along with the struggles he faces as a widower trying to raise his children correctly. He wants his son to follow in his footsteps in the Sea Guard service, but Isildur has dreams of his own, creating tension in the family.

Elendil is so important because he’s an ancestor of Aragorn, the man who will become the future king of Gondor in The Lord of the Rings. His sword Narsil is the very weapon that broke when used against Sauron. Without him, this Middle-earth epic would be vastly different, but in The Rings of Power, he’s not yet the royal he’s destined to become. Tolkien hadn’t defined him too clearly, giving the show room to explore Elendil as a person.

There are multiple connections and subtle nods towards The Lord of the Rings, and fans are picking up on them. The series takes place during the Second Age prior to Sauron coming into power, and prior to the Rings of Power being forged. There’s still quite a lot of mystery, however, including the identity of The Stranger, the magical man who fell to Middle-earth.