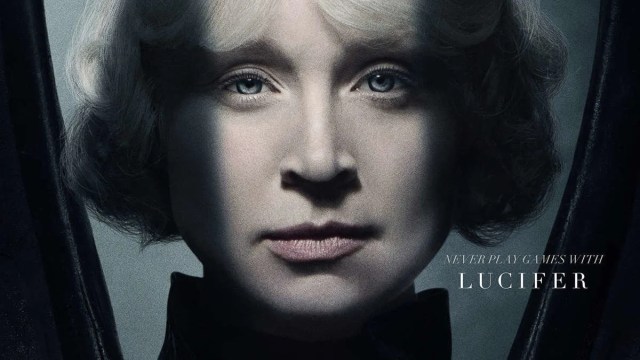 The Sandman season one ended with some major revelations, and one of the biggest was Lucifer’s new plan. Lucifer is played by Gwendoline Christie from Game of Thrones and it’s immediately evident that they are no fan of Morpheus/Dream, played by Tom Sturridge. Both characters are representations in opposition of one another; Morpheus is the King of Dreams, inspiring people to follow their fantasies, and Lucifer is the Lord of Hell, who damns souls for eternity. It’s no wonder they can’t get along.

At the beginning of the series, Morpheus has been captured by occultist Roderick Burgess (Charles Dance) and he’s imprisoned for 100 years. After he’s let out, he returns to the Dreaming to discover its decaying and goes on a mission to reclaim his tools of power. One of these tools is his helm made from the spine of an ancient god, which is in Hell, meaning he has to enter the horrible domain to reclaim it.

Morpheus arrives and battles with Lucifer for the helm by playing The Oldest Game, a back and forth where they call out scenarios to defeat the other. Morpheus succeeds as the victor, and Lucifer is none too happy about it. Lucifer tells Morpheus “What power have dreams in Hell?” and promises to destroy him before he leaves Hell, foreshadowing future events. Matthew the Raven (Patton Oswalt) asks Morpheus if he thinks Lucifer will come after him because he just publicly humiliated them, but at this point, Morpheus is more focused on retrieving his last tool, his Ruby.

After Morpheus collects all his tools of power, he has a heart-to-heart with his sister Death (Kirby Howell-Baptiste), destroys his nightmare creation the Corinthian (Boyd Holbrook), and confronts his sibling Desire (Mason Alexander) for their interfering with the lives of humans. In the final scene of the season, Lucifer receives a message from Lord Azazel, who demands a meeting. He comes at the bidding of the Lords of Hell, who have assembled against Dream of the Endless. The Armies of Hell are Lucifer’s to command in order to invade the Dreaming, the waking world, and one day even the Silver City. None of the Lords of Hell can leave, so expanding its borders until that’s all there is their best option. Lucifer agrees to act, make God livid, and bring Morpheus to his knees.

In the graphic novel Seasons of Mist, Lucifer Morningstar retires from Hell in a surprising twist. He sent away all his damned souls and demons, and hands Morpheus the keys to Hell. Lucifer had grown tired of his adversarial role with Morpheus and wanted no part of it. Morpheus cuts off Lucifer’s wings at the Dark Lord’s request, and it really seems like he no longer wants any part of Hell. It’s not likely this change of heart will happen just yet in the show.

With this being a TV series, it would make sense for the show to have a more dramatically visual outcome. Christie’s Lucifer has a more vengeful motivation against Morpheus, God, and the other realms. A war is brewing with Lucifer in full control of the Armies of Hell. They pose a serious threat to those who would stand against them. They will strike against the waking world and the Dreaming World, and knowing how cunning Lucifer is, there will be plans to see Morpheus unseated from his throne. Lucifer could wait for Morpheus to become distracted by other matters to bring down his kingdom. His imprisonment left his realm vulnerable without the Dream Lord there to protect it.

When Lucifer hands over the keys in Seasons of Mist, the dead return to Earth, and gods and other beings arrived in the Dreaming. These included Egyptian gods, Norse gods, faeries, and demons, and caused chaos as parties requested the key for themselves, or wanted Hell to remain close. This could be a tactic Lucifer could use in Netflix’s version to present Morpheus with a difficult problem to solve and weaken the Dreaming’s borders enough for Hell to expand further into its boundaries.

The Silver City won’t be very easy to get to. It’s a beautiful domain that’s host to the angels and exists outside the created order of things. Lucifer was a fallen angel who was banished from hell, which could pose a viable threat against the heavenly city. Duma and Remiel are two angels from Silver City and they will undoubtedly show up during this part of the story. It might take the combined forces of the waking world, the Dreaming, and the Silver City to fend off Lucifer, and if they are to prevail, it could return to the graphic novel storyline, where Morpheus becomes ruler of Hell, and he could then give the key to Duma and Remiel. In the graphic novel, the angels are commanded to take over Hell, but Remiel refuses and Duma accepts the key from Morpheus.

Whatever way this goes down, whether by using force outright or tactical trickery, Morpheus will have his hands full. Lucifer is more powerful than ever before and planning to expand the borders of Hell using the Armies of Hell. The war with Morpheus is only just beginning.