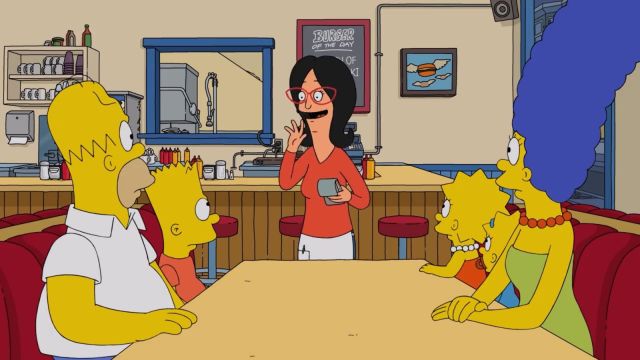 Image via The Simpsons

Death Note isn’t the only crossover featured in the newest The Simpsons ‘Treehouse of Horror’ special. Another animated series will be crossing paths with America’s longest-running family show. Unfortunately, there won’t be any major stylistic changes for the yellow family. Perhaps most of the animation budget went toward the anime tribute.

The Simpsons released a preview from the Halloween special on Twitter, where the family escape “Simpsonland” and arrives at Bob’s Burgers. They were then met by Linda Belcher who was surprised by the family’s appearance but didn’t question it, and proceeded to sing about “sweaty cheese”.

Based on the clip, it seems like The Simpsons family wants to escape their former lives. Unfortunately, little did they know that would still be trapped in a place where animation IPs live, but are segregated.

Fans were shocked to see that this world of animation featured in the special does not only feature titles that belong to Fox. If you looked closely, other shows such as Netflix’s Big Mouth, Adult Swim’s Rick and Morty, and Nickelodeon’s Spongebob Squarepants have their own little worlds that are separated from the other shows.

Alongside the Bob’s Burgers crossover, this year’s ‘Treehouse of Horror’ will feature a tribute parody to the popular anime series, Death Note. According to fans, the Death Note parody was deemed ‘the best one yet as it was produced by the same animation studio that did the original anime.

The Simpsons ‘Treehouse of Horror XXXIII’ was already aired on Fox but it will make its way to streaming on Oct. 31, 2022.