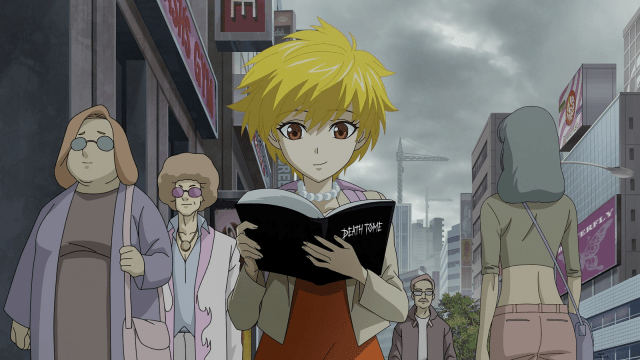 This year’s spooky season is well underway, and a staple of Halloween for the past thirty-odd years has been The Simpsons Treehouse of Horror specials. We’ve just had our first sneak-peek of the 33rd episode – and let’s just say anime fans are going to be frothing at the mouth for this one.

Treehouse of Horror XXXIII will be divvied up into three parts – a The Babadook parody titled The Pookadook, a Westworld parody titled Simpsonsworld, and finally, a Death Note parody titled Death Tome – and a first look clip is currently making the rounds on social media.

As you can see, it’s thrown the traditional Matt Groening art style out of the window in favor of a full-blown anime parody. The clip reportedly made its debut via a FOX Station in Latin America, per Comic Book.

It looks objectively good and extremely faithful to the original Death Note anime, and that’s no coincidence – the studio behind the episode’s animation is DR Movie, which was involved in certain aspects of production in the original Madhouse-produced anime.

A number of screenshots providing a deeper dive into the world of Death Tome have also popped up, finally answering a question we didn’t know we’ve always had – what do Homer and Marge look like as anime characters?

It’s going to be really awkward if a Simpsons parody turns out to be better than that travesty of a live-action Death Note film, and even more so if it’s more celebrated than the upcoming Netflix TV series.

It’s looking like fandoms of both Simpsons and Death Note are in for an absolute treat come Oct. 30 when Treehouse of Horror XXXIII airs  at 8:00pm EST on FOX stations. If live TV isn’t your thing, you can catch it on Hulu the next day.