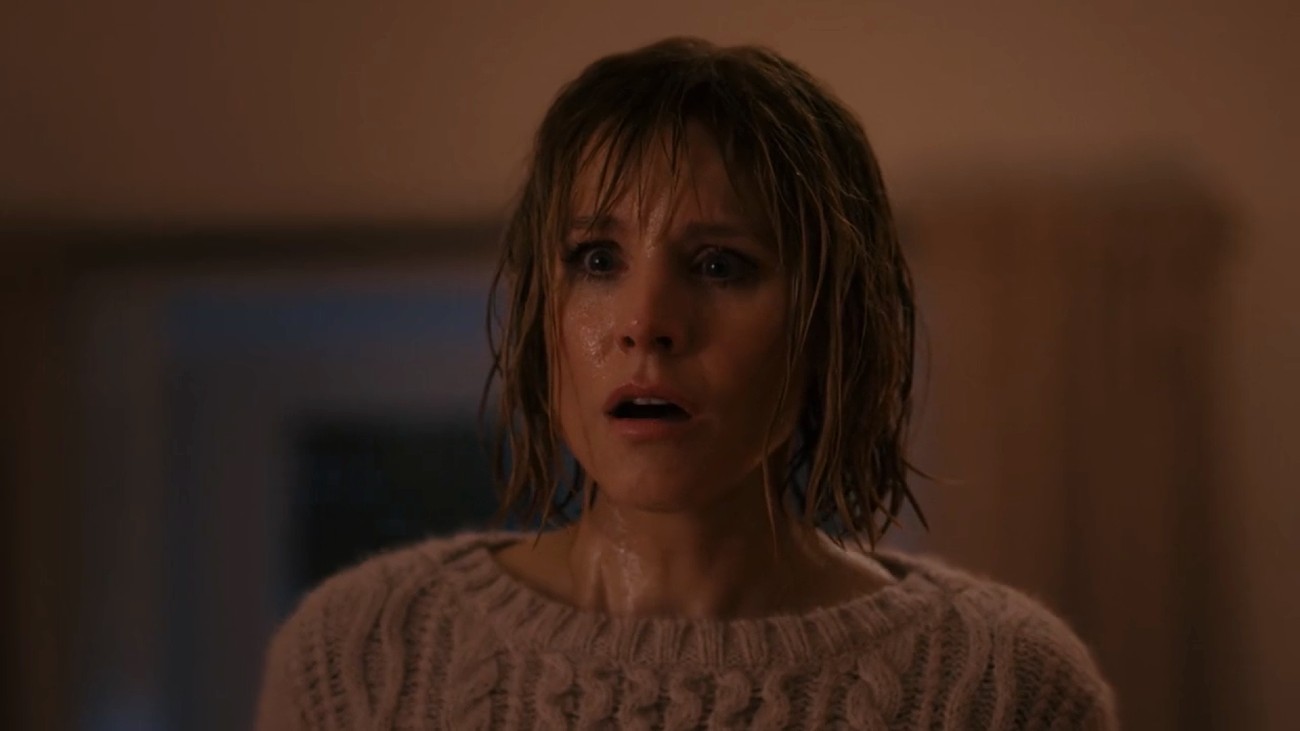 Fresh off her Emmy-award deserving performance in the NBC comedy series, The Good Place, Kristen Bell has returned to the small screen with the comedy-thriller, The Woman in the House Across the Street from the Girl in the Window.

It’s supposed to be a parody of the done-to-death domestic suspense genre, seen in The Woman in the Window, The House Across the Street, The Girl on the Train, etc. While it confusingly embraces the very elements it was supposed to mock, what works in its favor is that even the uncoordinated plotline it maps out ends up offering a juicy mystery with one mind-boggling conclusion.

Warning: Spoilers ahead from The Woman in the House.

The Woman in the House has every element we have already seen a hundred times. We meet Anna (Kristen Bell), a grief-stricken, lonely woman who is over-reliant on alcohol and is gulping down medicines for her depression and anxiety. She lives alone in a big house, afraid of every creak and wary of every outsider, but then a handsome single father, Neil (Tom Riley), moves in the house across from hers. She gets engrossed in watching them, bonds with his nine-year-old daughter, Emma, and shares some heated glances with Neil before discovering that he has a girlfriend, Lisa (Shelley Hennig), who instantly dislikes Anna and vice versa.

Anna starts keeping her distance from the family until one day she witnesses Lisa standing in the window of Neil’s house, with blood gushing from her neck. But when Anna reports the same to the police, everyone from the cop to Neil and even her therapist (who is also her ex-husband) refutes her claims, stressing that Lisa is alive. Anna keeps digging the mystery, wanting to prove herself, and makes discoveries like the suspicious death of Neil’s wife and how Lisa is actually a scam artist who deceives wealthy single men along with her partner Rex (Benjamin Levy Aguilar).

Throughout her self-assigned sleuthing mission, Anna doubts everyone from Neil, Rex, to even her handyman, Buell (Cameron Britton). And just as the lack of any solid evidence convinces Ana to give up on her efforts (which is somewhat annoyingly stretched across the first six episodes), the last two episodes offer a twist in a story that had been majorly predictable till then.

The Woman in the House ending explained

Just as Anna is convinced that Neil couldn’t be a killer after Rex is arrested for Lisa’s murder, the cops come for her as one of her palette knives with her fingerprints was discovered in the woods, next to Lisa’s body. Like every other film, show, and novel, The Woman in the House is supposed to be a parody of, here, too, the police are frustratingly incompetent. Instead of making use of their forensics team to figure out what kind of weapon was used to kill Lisa, they are quick to pin the murder on Anna as soon as they discover the palette knife.

Even Anna is almost half-convinced that she could have killed Lisa during one of her alcohol-slash-antipsychotic medication-induced hallucinatory episodes as she keeps remembering snippets of stabbing something. But thanks to the encouragement provided by her ex-husband, Douglas, she trumps her inner fear and soon discovers that all she stabbed was a painting of Lisa she had made. The story then makes Buell the next possible suspect as he has been secretly squatting in Anna’s attic, was one of Douglas’ former patients who killed his family, and is seen walking up to Neil’s house with a hammer. Anna rushes to save Neil and Emma, only to discover the biggest shock of her life.

Despite knowing the “inspirations” behind The Woman in the House, many would never suspect who the actual mastermind was behind the whole story- the seemingly sweet nine-year-old Emma, who turns out to be a sadistic “monster.” So, everyone who has died in the series has been a victim of her maniac murdering spree.

Emma killed her mother as she dared to get pregnant even though she wanted to be an only child. She pushed her teacher to her death because she called her “crazy,” while Lisa got a knife in her neck because she refused to buy the chocolate bars Emma was selling for her school fundraiser. Being the shocking killer of the story, Emma confesses to her crimes and how she stole one of Anna’s palette knives to frame her in a traditional mystery thriller movie monologue.

She also killed her father because she thought his ventriloquist act was lousy and attacked Buell as he probably saw her murdering Neil. While it is not verbally clarified, it is obvious that she had been the one messaging Neil and Rex from Lisa’s phone to make it appear that the latter was still alive. As for how a tiny nine-year-old managed to hack a full-grown woman’s body into pieces and hide it in the forest, it is logically hard to explain, but for the sake of The Woman in the House’s storyline, that’s how it happened.

Though severely wounded, Anna eventually manages to get the upper hand and kills Emma in self-defense. Thankfully Douglas arrives just in time to witness the scuffle, serving as the witness to Emma’s crimes and thus proving Anna’s innocence.

The finale sets up a second season

The traumatic event was enough for Anna to get over her past tragedies, her fear of rain, and embrace her passion for painting again. The story jumps forward a year, where we see Anna and Douglas reunited and parents to another newborn baby girl. Anna’s mental health has significantly improved, though she is still on a light dosage of Xanax and hasn’t ditched her bad habit of taking the medicine with alcohol. On the flight, she meets a peculiar passenger (a Glenn Close cameo) before she dozes off.

When she wakes up, Close is not seated beside her anymore. But when Anna goes to the bathroom, she finds her dead in the airplane stall. However, the body mysteriously disappears when she brings a flight attendant to the bathroom who cryptically informs her that no one sat next to her since the flight took off.

She returns to her seat, afraid that she is hallucinating again, only to discover the golden compact used by Close’s character previously. This proves that a) Anna is not imagining things, b) Close’s character is really dead, c) the plane’s staff is involved in her mysterious murder, and d) The Woman in the House creators plan on bringing back Anna and her questionable detective skills for a second round.