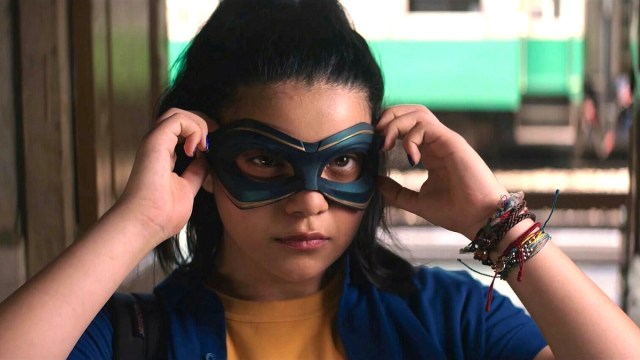 Ms. Marvel is now four episodes in and doing a great job of capturing the mood of the original comics run without directly adapting the story. The biggest alteration is Kamala’s powers arising from a magic bangle rather than ‘Terrigen Mist’, and that she has energy projection abilities rather than being stretchy.

Despite these changes, each week sees some of the best characters from the comics make the leap into live-action, with episode four seeing the debut of one of the coolest in the entire run: Red Dagger. As played by Aramis Knight, Red Dagger (aka Kareem) is essentially a Pakistani ninja. With a mission to protect the people of Karachi, he wields throwing knives, is an expert martial artist, and has a neat line in The Terminator references.

The MCU Red Dagger visually resembles his 616 counterpart, though his story going forward should be somewhat different. In the comics, Red Dagger originally lived with Kamala’s grandmother, later going on to join an exchange student program and live with the Khans in Jersey City.

We may yet see some of that happen, but with Ms. Marvel apparently embarking on a time travel story as it heads towards the season finale, his future remains unknown. Right now the IMDb credits Knight as appearing in the final two episodes, we should at least see more of him going forwards (though these listings aren’t necessarily accurate).

Between Kareem, Kamran, and Bruno, Kamala has a lot of hot guys on her radar – maybe her real superpower is making people instantly get crushes on her?